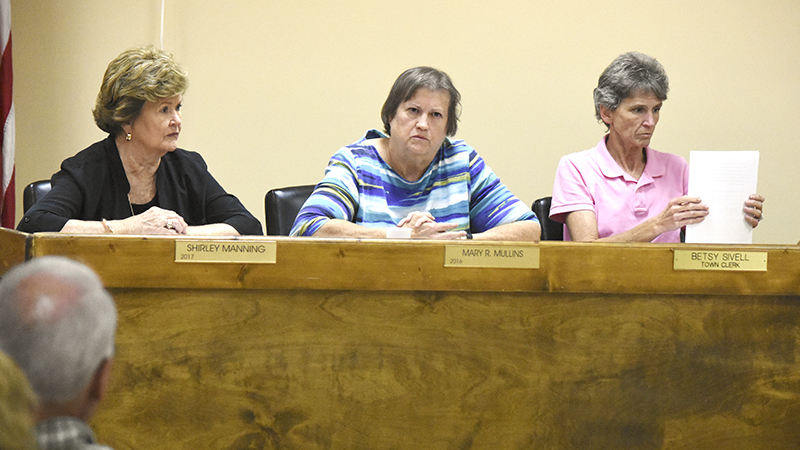 The Town Council of Pine Mountain listened for an hour Tuesday as citizens gave reason after reason why a DASH project that could have resulted in 50 low-income homes was a bad idea. Then, four members of the five-person council voted against moving forward with the project, ending the discussion for good.

Councilmembers Shirley Manning, Mary Mullins, Josephine Bray and Keith Pendergrass all voted no. Councilmember Tammy Pierce was not at the meeting.

“It felt like they were trying to slip it in under the carpet, trying to have a decision be made around letting people know and getting people’s thoughts, and I have a problem with that,” Pendergrass said before casting his vote against the project.

When the official vote was taken, just about everyone in the packed room at Pine Mountain Town Hall stood and applauded loudly.

The meeting was held just to discuss the one vote, and the council spent the first hour listening to complaint after complaint. Nobody spoke in favor of the project.

Many of the complaints centered around the location of the proposed subdivision, which would have been on Highway 27 on a 40.25 acre of land across from Dollar General.

“Last week, my wife let my dogs out and forgot and left the shop door open all weekend. Nobody messed with a thing. You bring this low-income housing in, that’s going to change,” said local business owner Bill Castleberry. “I’m all for helping people that can’t do, but we don’t want it at our door.”

Everyone who attended was invited to sign a registration sheet and speak. They were asked to sign if they were for or against the project, but nobody signed the “for” sheet. More than a dozen people spoke at the meeting and more signed the sheet but chose not to speak, because their point had already been made by a speaker before them.

“I want to set the record straight. I’ve heard people say ‘why did the people of Troup County want to have this subdivision down here?’” Let me assure you, I have not found a single person in Troup County who wants this development,” said Hilda Railey, a Troup County resident. “Troup is opposed to it. We aren’t opposed to low-incoming housing. We know that it’s a necessity, but it’s in the wrong place to serve Troup County.”

Pine Mountain would have supplied the utilities to the development, and many at Tuesday’s meeting complained about aging infrastructure. Others raised concerns about where children would go to school and who would provide emergency services.

DASH founder Ricky Wolfe said he was surprised at the reaction from the people against the project.

“We don’t go where we’re not wanted. Being a nonprofit with no profit incentive, we have to feel welcomed in a community to make these work,” Wolfe said. “There was just never really any community support in a positive way to move forward with the project.”

He said last week he tried to give a presentation at a town hall, but after two and a half hours of interruptions he gave up.

“This was a very unusual response. We’ve done six of these projects in Troup County and four of them in Alabama, small towns in Alabama, working with the same developer. This is the first time that an application has been rescinded due to a lack of community support,” Wolfe said.

“I’m upset and disgusted by the extreme rudeness and behavior of the people who [were in] that meeting. I don’t know how individuals can say they enjoy living in Pine Mountain because of it’s friendly, non-threatening, easy way of life — whatever description you want to have — and then be so embarrassing and rude at that meeting,” Mullins said.

Wolfe said looking at the census data of Pine Mountain, almost 30 percent of the population lives in poverty. He thought this proposal could have helped many people in the same way four projects in LaGrange and one in Hogansville and West Point have benefited others.

“These units for housing are basically for the working poor. It’s a very different model from public housing,” Wolfe said.

“There’s no Section 8 vouchers, there’s no subsidy paid. It’s a different model, and I was just extremely unsuccessful in trying to convey that.”

All Troup schools to give car to student