Faith got Thomas through WWII 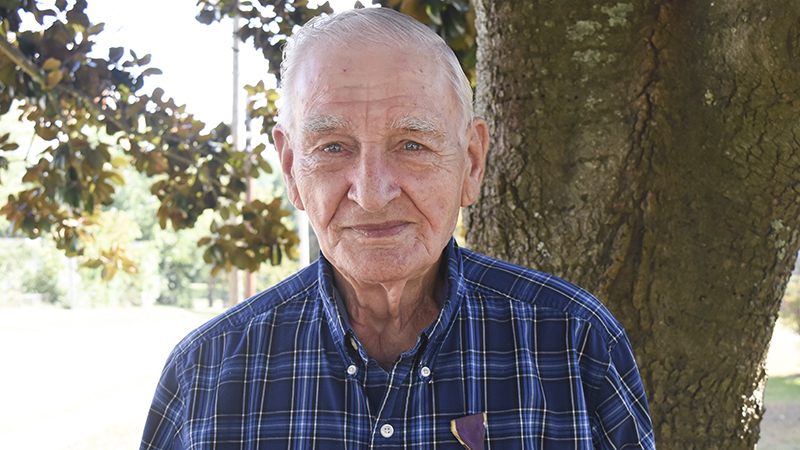 If anyone understands the sacrifices of war, it’s 92-year-old LaGrange resident Horace W. Thomas. He lost his brother in Korea and during World War II, Thomas was near a mortar fire explosion that resulted in the loss of several fingers on his left hand.

He was awarded a purple heart for the injuries he suffered June 17, 1944, near Italy. His unit was ordered to move out due to the 25 to 30 German soldiers nearby. As the German soldiers fired shells over the mountains, Thomas and his unit moved forward.

Then, he suddenly heard a shell that didn’t sound completely right.

“It busted about as far as me to James,” Horace said while looking at his son sitting a few feet away. “The sand kind of hit me in the side of my face, but it hit [my hand]. It knocked those two fingers just about off. They were hanging. It busted that one and busted this one.”

He was taken to a first aid station, then taken to a hospital near Naples, Italy, where he spent a great deal of time. He celebrated his 19th birthday there.

Eventually, he was transported to Lawson General Hospital in Atlanta.

He trusted his faith to get him through the war, and today — even in his 90s — he never misses a day at Sonrise Baptist Church.

“God wasn’t ready to turn me loose,” he said.

He had a lot to get back to. The day before he was supposed to report to Maryland, his first son, Vestal, was born.

He was granted eight days to report to Maryland due to the birth of his new son.

“I was just obeying the law of the land,” Horace said.

When he first came back from war, James said his dad was shy about showing people his hand. There are photos where he hid it behind his back, instead of letting it be seen.

“My mama, (Lillian), after she married him, she noticed every time he would go somewhere, he would put his hand in his pocket, like he was ashamed of it,” James said. “She told him, you fought for this country. That’s nothing to be ashamed of, and she got him out of that.”

Thomas was born in Carroll County, but moved to LaGrange before being drafted into the U.S. Army. He bought his current house on Williams Street in 1946 for $1,350 and has lived there for the last 71 years.

“I went to the bank and got $135 out of my pay from the army,” Horace said. “When I got that mustering out pay (from the army), I went and paid it off. I haven’t had to do nothing now but keep it repaired.”

He worked for Callaway Mills for years before taking a position Hawkins Oil as a gasoline truck driver. He delivered gasoline, diesel fuel, motor oil and kerosene to Troup and surrounding counties for 50 years. His starting pay was $35 a week.

He still walks around the neighborhood and drives himself to the store.

He just sold his 1970 pickup truck that he’d had for 40 years and the vehicle he drives now is a 1986 Chevrolet Caprice.

At his age, he’s in remarkable shape.

“I live like I always did,” he said. “I didn’t drink no whiskey or anything like that. In 1967, I quit smoking and I don’t miss too many days going to church and listening to the preacher.”