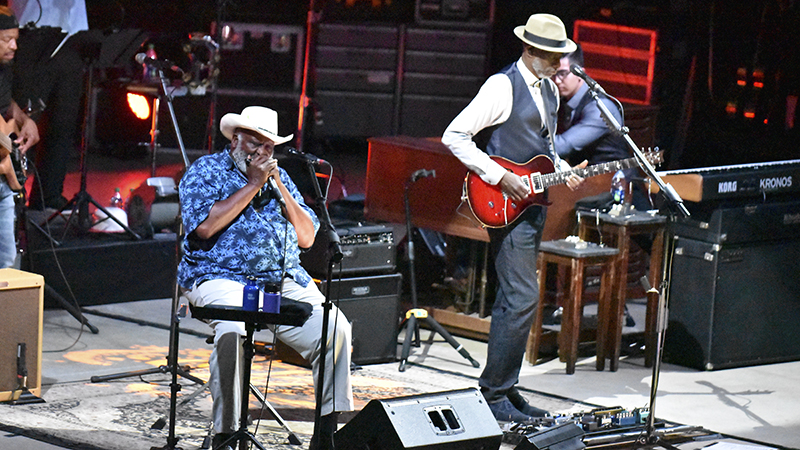 Locally raised blues sensation, Jontavious Willis warmed up the crowd on Friday prior to the TajMo concert featuring blues titans Taj Mahal and Keb’ Mo’. However, the announcement of an ice skating rink coming to the amphitheater this winter could only be described as cool.

This year, Sweetland’s Summer Concert Series has boasted a great turnout and a full house for several concerts, made especially impressive by the increase in the number lawn seats sold this year compared to last year. The ease of selling or transferring tickets for the main section for this concert season — the primary complaint of the first concert season — meant that sold out shows had every seat, or almost every seat, filled with excited music fans.

“We love Jontavious (Willis),” said Marlene Rhodes, who attended the concert with her husband. “We are so glad that he is here. We’ve seen him at Pure Life (Studios).”

Just because the Summer Concert Series is over, doesn’t mean the fun is over at the amphitheater though. In addition to events like the Flashback Friday Lawn Party coming up on Oct. 20 and the Chili Cook Off and Trick or Treat on Oct. 28, the amphitheater will also host a new major amenity this winter: an ice rink.

Beginning Nov. 17, the great lawn at Sweetland Amphitheatre will host an outdoor, covered ice rink. The rink will be provided and operated by Ice Days Outdoor Ice Skating Rinks. Officials are excited about the new attraction’s potential to take advantage of the amphitheater space during a season when it is generally too cold to comfortably attend outdoor concerts.

“In brainstorming various ideas on how to utilize Sweetland during its off season, an outdoor ice rink not only seemed like the perfect solution to take advantage of this great space, but also a compelling enough activity to entice visitors from around the region to visit our beautiful town,” said Becca Eiland, director of the Sweetland Amphitheatre. “During its nearly 13 weeks of operation, the ice rink will prove to be a significant driver of economic activity downtown as skaters and their families frequent restaurants and shops. The rink will also provide a healthy, outdoor activity during some of the coldest months and added spirit to the holiday season.”

The ice rink will be open through Feb. 19 and will be one of several activities provided by the Downtown LaGrange Development Authority. Other activities include the annual carriage rides through downtown, the annual Holiday Retail Sip & Shop and visits by Santa to the square.

“We’ve figured out how to make ice even when it is 70 degrees out, so don’t worry, it is real ice,” said Jim Gomez, who co-owns Ice Days with his wife Andrea. “We are going to set it up on the grass area up there. It is an amazing transformation.”

According to a press release, the amphitheater’s staff anticipates that Sweetland on Ice will attract 15,000 to 20,000 visitors to downtown LaGrange during the 13 weeks that it will be open.

Concessions including hot dogs and beverages will be sold during skate times and the Jackson Heating and Air hospitality tent will be available for skaters and their families wanting to get warm.

Faith got Thomas through WWII