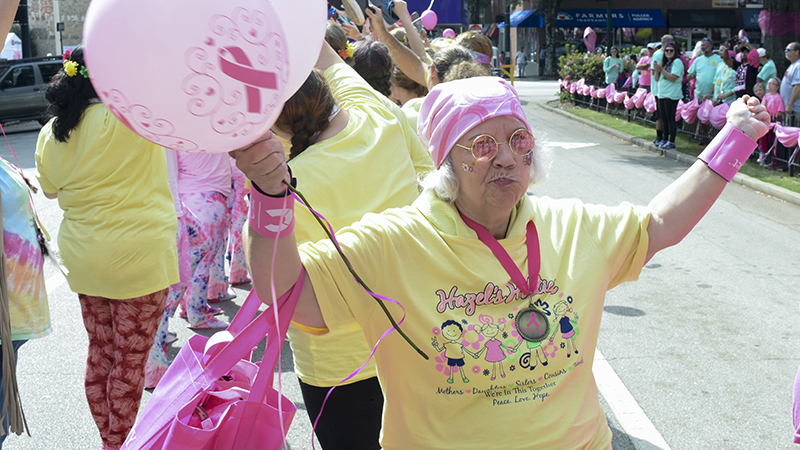 Lafayette Square was covered in pink Saturday for the annual Paint the Town Pink/Hope for a Day walk to raise awareness for breast cancer.

The water in Lafayette Fountain was pink and just about everyone wore a pink shirt. Hundreds attended the event, which included a 10-mile walk to raise money to fight breast cancer, and a walk for those who have fought off or are currently battling the disease.

Whitney Jones, 28, was one of many that took part in the survivor walk. She was diagnosed with stage three breast cancer this summer during a routine mammogram.

There’s no history of breast cancer in her family, so she was shocked when she got the news.

On Saturday, she made the short drive from West Point to take part in the event for the first time.

“There’s a lot of support out here. A lot of love, a lot of genuine love,” Jones said. “People actually know what you’re going through and what you feel like.”

Jones had another reason to celebrate Saturday too — she had just finished a bout of chemotherapy on Friday.

“A lot of people have hugged me and said ‘oh, you’re so cute,’” Jones said. “I was very ashamed of my head for a while. I wore wigs and scarfs because I’m so young. To be so young to go through this, I know I can help someone else. Younger people are going to go through. It’s affecting a lot of people, different races and different ages.”

The theme of the day was hope, but it also served as a reminder for everyone to get an annual checkup. Chris Scott’s motorcycle might’ve served as the biggest reminder of all.

The bike was parked next to Lafayette Fountain and is painted bright pink. He rides it every day in honor of his mom, Sissy Sammons, and step mother, Shelly Rogers, who have both battled breast cancer.

He bought his motorcycle last year and decided to paint it pink after a family friend, Sam Sheppard, died from breast cancer.

“In October, she died. I had the bike sitting there, I was working at a body shop and I said ‘you know what, I’m painting this thing pink.’ I painted it pink at Collision Autocraft and then Signs 4 Less helped me do the decals, and the breast cancer bike was born,” Scott said.

He said he’s been surprised by the reactions from people who have seen the bike. On Saturday, many walked up to take pictures with it.

“Well, my emotion goes into my bike.”

Tami Webb, who serves as one of the organizers for the Hope for a Day Walk, said that the overall event usually raises $70,000 a year. Saturday was the 10-year anniversary of the death of Webb’s mom, Hazel Freeman, who died of breast cancer.

She said that made it an emotional day, but family in town helped. Webb has three cousins, Carol Connelly, Patty Wheat and Kellie Webb, and an aunt, Nell Barkhouse, that travel to LaGrange every year to walk. All four of them have been diagnosed with breast cancer.

“They come every year, just to do this walk, just to be with our family,” Webb said.

There were dozens of tents set up by local healthcare representatives. Some offered free healthcare checks, while others registered people for mammograms.

Cart Barn receives notice, to close by end of…