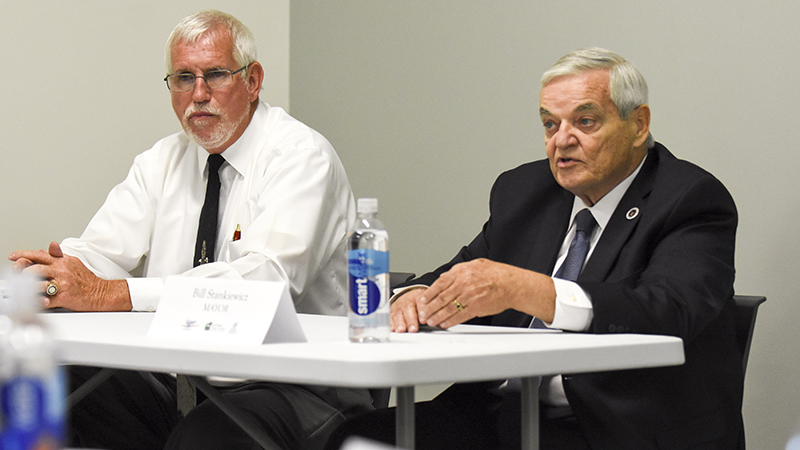 Mayoral candidates Bill Stankiewicz and Winston Herren, along with city council candidates Valerie Buice and Marichal Price each had a chance to tell voters their stance on important issues, such as the cost of utilities in the city and their thoughts on the upcoming SPLOST vote. Incumbent Reggie Jackson has no opposition for council post No. 1 and did not take part. Price and Buice are running for post No. 2.

The forum was hosted by state Rep. Bob Trammell and was a joint effort by the Troup County Democratic Party and the Troup County Republican Party. For more on the forum regarding Buice and Price, see Thursday’s copy of the LaGrange Daily News. Here’s a look at the mayoral forum and where each candidate stood on many of the important issues discussed:

Two of the first five questions were linked to the hiring of new city manager David Milliron, who started on the job last week. One question asked candidates which metrics they would use to judge the city manager’s job performance. Another asked about the relationship the mayor should have with the city manager.

Herren said if he gets elected, he plans to get more involved with the city manager. He said he would start by sitting down with Milliron to see how he wants to move the city forward.

Stankiewicz said the city manager should be judged on his communication.

As for the second question, Herren said everyone needs to get on the same page.

Stankiewicz disagreed, saying the mayor, council and city manager are usually not going to agree completely.

“If the mayor, and the council and the city manager always agree, something is wrong. There is going to be a natural disagreement of views and a sharing of views,” Stankiewicz said. “I’ll go back to my original answer about communication. As long as that communication occurs openly and frankly, we won’t have a problem.”

The candidates were asked about recruiting new business and industry to the city of Hogansville. Stankiewicz said growth is “critical” to the city’s future.

The current mayor noted an incoming housing development that will include 56 houses and a second one that is currently being discussed by the Planning and Zoning Commission for 182 more homes.

“If you look at the layout of the city, if you look at our zoning and the land we have available, I don’t see large industry coming to Hogansville,” Stankiewicz said. “I do see residential growth coming to Hogansville. I think that growth will provide a vehicle to lower our utility costs to our citizens because you will be spreading the cost of providing that service over a much larger base.”

Herren said the high cost of utilities remains the biggest deterrent in Hogansville for new residents and new business.

“First off, I don’t think we need to get our cart in front of our horse. We need to have reasons for business to come to Hogansville. We need to work on our utilities to where we get the citizens we have now not moving out because of the situation with utilities. That’s a very big issue of mine. I’ve talked to a number of citizens and that is their No. 1 complaint is the utility situation. If we don’t fix that problem, industry is not coming into this city.”

Utilities remain where the two mayoral candidates seemed most divided. Herren called utilities one of his most important issues throughout the night and noted several conversations he has had with citizens about the high cost of utilities in Hogansville.

Stankiewicz, on the other hand, said the utility rates are very comparable to nearby cities.

Herren said he agrees with the mayor that the rates are not the problem. He said the issue is the amount people are being told they are consuming.

“People are not coming to this town because of our rates. They are all saying the same thing — ‘Don’t go to Hogansville. You can’t afford to pay the utility bill… When a guy is paying $500 a month in rent and $700 a month in utilities, that’s not going to work. We aren’t going to have growth under those conditions. Business is not coming under those kinds of conditions. We’ve got to fix our utility problem. We’ve got to figure out why we are being charged something that is impossible to be charged.”

Stankiewicz said when people say their utility bill is too high, the city re-reads the meter and looks closely to make sure there’s no leaks.

“When you talk about the $500-$700 utility bill, what you find is the house isn’t insulated, the windows aren’t caulked, the thermostat is set too high,” Stankiewicz said. “It’s not the rates. It’s the consumption.”

The candidates were specifically asked about the upcoming Special Local Option Sales Tax, which has provided funding for several significant projects in Hogansville in recent years.

Herren said he wants to know exactly which projects SPLOST is funding before making a final answer.

“Yes and no,” he said when asked if he supports SPLOST. “I would like to find out first and take some more study on what SPLOST is really for, what it’s going to help. I think if the SPLOST can be proven that it can benefit the citizens of Hogansville, then yes I’d go along with the SPLOST, but not just to raise taxes. I want to know the SPLOST is going to work before I go with the SPLOST.”

The current mayor was unwavering in his support for SPLOST. He said he is “unequivocally” supporting SPLOST.

“We absolutely need SPLOST in this city and every small city in Georgia needs it because it provides capital funds that small cities don’t have,” Stankiewicz said. “This coming SPLOST we will have $1.2 million for water and sewer projects and about $800,000 for city equipment — police cars, trucks, etc. Those kinds of expenditures become burdens on our population if we had to pay for them in the city.”

Stankiewicz said it would be a “financial disaster” for Hogansville and other cities in Troup County if SPLOST was voted down.

“We’ve got senior citizens that can’t buy medicine because they are trying to pay their bills they’ve got now, with utilities and stuff. What’s going to help is to put industry in here,” Herren said. “I think we need to get industry in here and fix what we’ve got with the money we’ve got. Don’t spend money you don’t have.”

Stankiewicz came back by saying almost that 50 percent of the SPLOST funding comes from non-residents.

“We had three public hearing on how citizens wanted to spend those SPLOST dollars and after receiving public input and after those three public hearings, we dramatically changed how we were going to spend that money in response to what these citizens wanted,” Stankiewicz said. “Unless you consider police cars and the water and a sewer system — if you consider them useless expenditures — I disagree.”