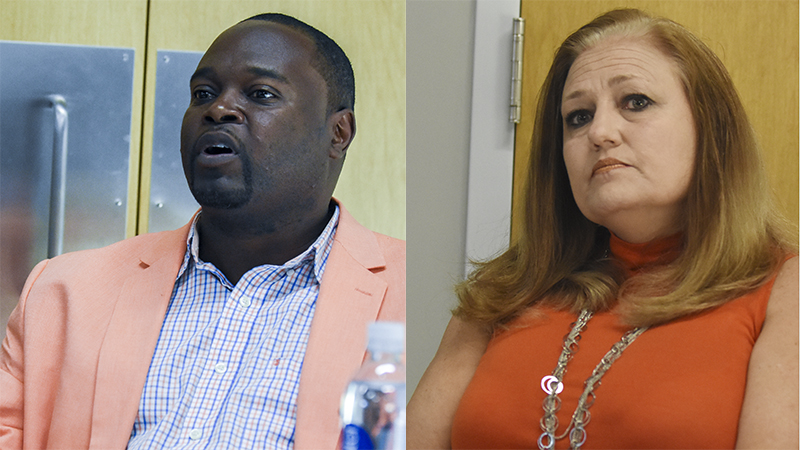 On Tuesday night at the Hogansville Public Library, candidates for mayor and city council took part in a political forum.

In Wednesday’s newspaper, we wrote about the mayoral debate between Winston Herren and Bill Stankiewicz, but Valerie Buice and Marichal Price also squared off in a forum for open city council post No. 2.

Here’s a look closer look at each candidate’s responses from Tuesday:

No. 1 ISSUE FACING THE CITY

Each candidate was asked about the No. 1 issue facing the city of Hogansville. Price said utilities, a common topic throughout the evening.

“The one thing I’m willing to do is to help get out and see if I can talk to other people and get our councilmembers to see if we can get more business in,” Price said. “Help with the business. See what we can do to get them in to get a better rate for utilities.”

Buice said the city of Hogansville is “broke.”

“I can’t tell you the companies I’ve spoken with that said ‘I’m not doing work for Hogansville because I can’t get paid,’” Buice said. “That’s not a way to be.”

Price, on the other hand, said the government works when everyone works together.

After listening to the mayoral candidates go back and forth about the cost of utilities — one of the most talked about issues throughout the night — both city council members were asked their thoughts on the subject. Price said he believes the utility rates are fair, but he said the housing has to be improved.

“A lot of the housing that is being rented, a lot of them don’t have good insulation,” Price said. “It’s not up to date with where it needs to be at.”

Buice said the rates are too high. She said her rates were lower when Diverse Power was her utility company.

“If new business wants to come in, we can tell them we are building more homes, so more people come in,” Price said. “They won’t have a long way to travel. They can stay in the city and have a good job and they won’t spend as much money on gas back and forth.”

Buice said the city needs to make itself attractive to new businesses.

She recommended going to the businesses in Hogansville and asking why they’ve stuck around and what they like about Hogansville.

“See what they think is wrong, but [ask] why they are staying,” she said.

Buice said she once had a business in Hogansville, but wouldn’t own another one right now. She said the license fee is high.

“I support the SPLOST. When we drive through and the grass is overgrown over the side of the curb, and you have to pull out so far to see where you are going — we can use the money to clean up the city and make the city back beautiful again,” Price said.

Buice said she also supports SPLOST but wants to ensure the money is being spent the way it’s supposed to be.