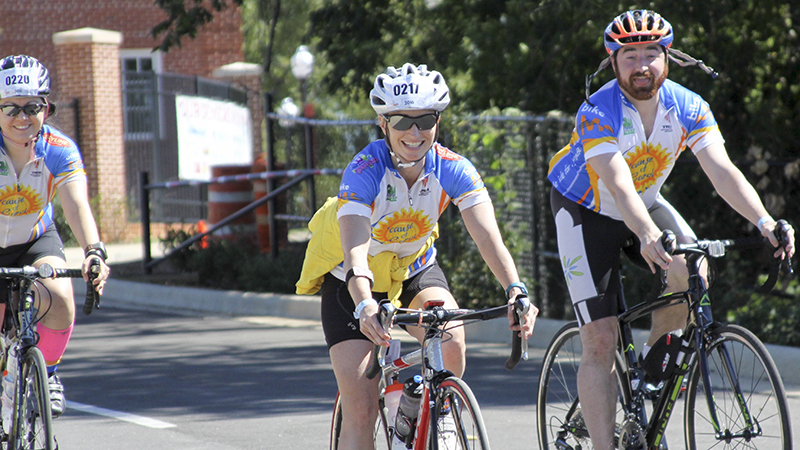 Local cyclists are getting ready to support multiple sclerosis research and one of their fellow riders by participating in Bike MS: Atlanta Peach Ride 2017.

This year will be Pat Hamby’s third year riding in the race, and it holds special significance to her, since the funds raised by the event go toward research on the very disease that she personally battles. Hamby has been battling MS for 16 years.

“We have not only good friends who have donated to the cause, but we have several people who are actually participating in the ride itself. There is just really good local support. It’ll be a large local turnout of not just people who are riding their bikes, but people who volunteer and work at the rest stops.”

Hamby began biking after being diagnosed with MS, and she rode for the cause last year when LaGrange was the central point on the ride and the year before when the ride centered around Callaway Gardens.

“I started riding bikes at our local gym about 10 years ago, and then about four years ago, I bought a bicycle and started riding on the road and participating in local bike rides and rides around the state,” Pat Hamby said. “The first year that I participated in (the MS Ride), it was held at Callaway Gardens, so I considered that a local ride, and since I have MS it was just a perfect fit for me, so I rode in it for my 60th birthday. I rode 60 miles.”

The next year, Hamby’s husband Thelon joined her on the ride. This year he plans to ride 60 miles each day. Pat will participate in the shorter ride of 35 miles per day. Both rides begin and end at LaGrange’s Sweetland Amphitheatre.

“This year it is going to start and end both days in LaGrange which is so exciting,” Pat Hamby said.

“There are people from all over the state who will be coming for it. It is a big event, and people even from Florida — people from other states are in it.”

Though there is currently no known cure for MS, Hamby has seen the impact of regular cycling on lessening some of her symptoms.

“For some people, no matter what they do it progresses,” Hamby said. “I know some people here in LaGrange who just have it real bad and were in wheelchairs and that kind of thing. Sometimes no matter what you do there is no reversing the disease, but it has been proven that especially like in my case which is a mild case, that regular exercise just keeps you stronger. It keeps you fit, and it just helps keep you healthy. It just makes you feel good.”

Her family has seen the results of that effort too.

“Pat has been very proactive in her battle with multiple sclerosis and is focused on being physically active to keep her strength up,” Thelon Hamby said. “She is my inspiration and the reason that I have taken up cycling.”

This year, Pat Hamby hopes to raise $500 for multiple sclerosis research before the ride.

“It is very near to my heart since I was diagnosed back in 2001, and this is a twofold thing for me because I love to bike, and I have MS,” Pat Hamby said. “This is the perfect fit.”

So far, she has raised $300 and the Golden’s Bike Shop team that she plans to ride with has raised $4,355 toward the cause with more donations expected to come inbetween now and race day. A total of $2,605 of those donations were raised by Thelon Hamby.

Bike MS: Atlanta Peach Ride 2017 will take place on Oct. 21 and 22. This year the ride is set to begin and end in LaGrange. For registration or to donate, visit Main.nationalmssociety.org/site/TR/Bike/GAABikeEvents?pg=entry&fr_id=29047.

No major problems from storm in Troup Co.