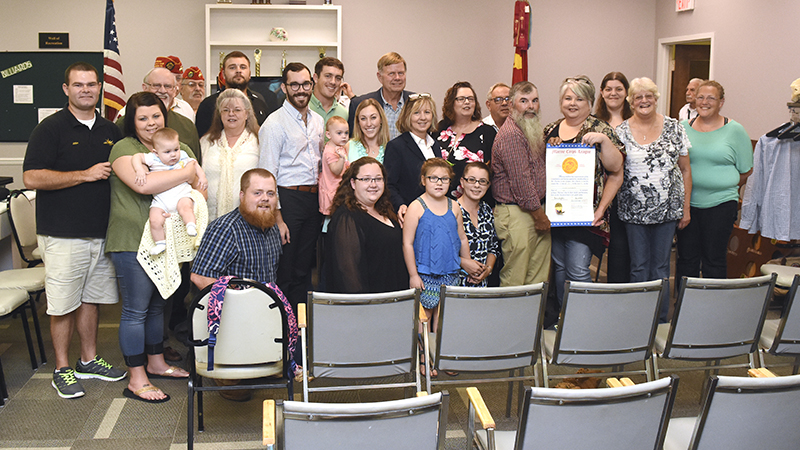 The family of the late Charles Waller poses for a photo Monday night during the meeting of the local Marine Corps League detachment. The detachment was officially named after Waller Monday.--Daniel Evans

The local detachment of the U.S. Marine Corps League honored the man who helped found it Monday night at the Active Life Center.

He was also part of the Battle of Chosin Reservoir and the Tet offensive, a Korean prisoner of war and the Marine Detachment 1st Sgt. on the USS Franklin D. Roosevelt CVA42. Waller was also named Veteran of the Year in November during the annual Veterans Day ceremony at the Troup County Veterans Memorial.

There were dozens of Waller’s family members at Monday night’s meeting, some of them holding back tears after the presentation.

“It’s an honor, but he would not ask for it. I appreciate the fact that he will not go softly into the night. He will always be here,” said daughter Mae Waller-Turner. “I remember somebody telling me when I was young, as long as you see a person’s name they are still here. He’ll always be here.”

Another daughter, Hazel Waller-Sosebee said as her dad grew older, he always talked about cutting back. Instead, he’d always add more duties.

He was there when Toys for Tots started with a few hundred toys.

Now, thousands of toys are brought in each year.

The Charles Waller Detachment 1040 has 30 members, with its primary goals to be supporting the marine corps, active duty marines, veterans and their families and to be leaders in the community.