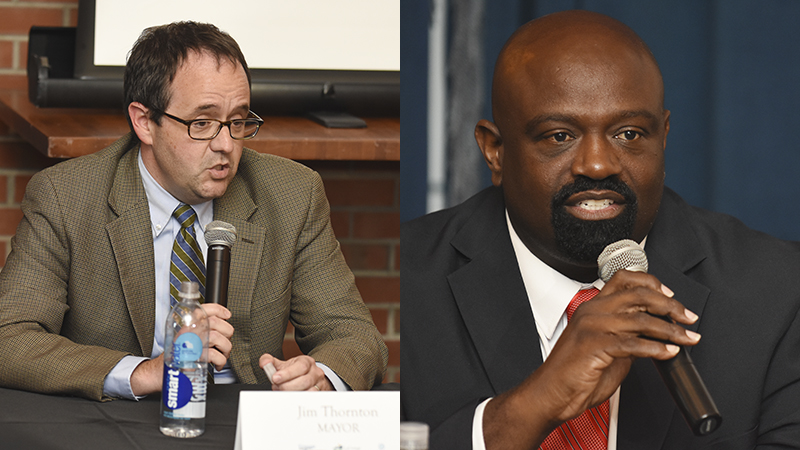 LaGrange mayor candidates Jimmy McCamey and Jim Thornton had a chance to talk about the important issues facing the city during Thursday’s candidate forum. --Daniel Evans

Voters in LaGrange had a chance to hear from candidates for mayor and city council position 1B on Thursday night during a forum at Del’avant.

The forum was hosted by the LaGrange-Troup County Chamber of Commerce, the Troup County Republican Party and the Troup County Democratic Party, and it allowed candidates a chance to give their stance on many important issues. State Rep. Bob Trammell served as moderator.

In the mayoral debate, mayor Jim Thornton and challenger Jimmy McCamey talked about utility costs, race issues, a city lawsuit and much more.

Jim Arrington, Luther Jones and Chuck Pitts also spoke on hot topics as they campaign for spot 1B on the city council.

For more on the city council forum, see the weekend edition of the Daily News.

Here’s a look at the mayoral debate, divided by the topics discussed on Thursday night:

One of the first questions of the night asked about a lawsuit that alleges the city of LaGrange’s policies restrict access to utility services. The lawsuit was filed in May on behalf of the Georgia State Conference of the NAACP, the Troup County NAACP, Project South and named seven individuals as plaintiffs.

Thornton said he couldn’t get into specifics since the question asked about pending litigation, but he talked about the policies in place.

“The city does operate as a utility enterprise. You mentioned our budget of $110 million. Eighty percent of that is generated by utility sales, so 80 percent of our budget is utilities and 10 percent is public safety, so that eats up 90 percent of your budget. You only have 10 percent for everything else the city does,” Thornton said. “Utilities is a big part of what we do. It enables us to have a reserve, to respond to public safety needs, to infrastructure needs when they arrive.”

Thornton said the city also has “extraordinarily low” utility rates. He referenced a study by the Public Service Commission, which rated the 94 utility providers in the city of Georgia. Thornton said LaGrange ranked as the 14th cheapest.

“The policies that are being challenged by Mr. Cox and others are nothing new. The city council unanimously adopted those policies in 2004 so they’ve been on the books for 13 years, unanimously supported by the city council every time it’s come up for consideration,” Thornton said. “I think ultimately the city will prevail in the litigation.”

McCamey said citizens have asked him about the lawsuit and about utilities specifically during his time on the campaign trail.

“I don’t know the dynamics of that report, but I’ve been informed that there are concerns with utility bills with how it relates to individuals having penalties or fines placed on utilities,” McCamey said. “I think that’s a major issue, although it may be perception. People believe they are being targeted because of their race, because of the location that they live in. I think we need to address that. I think it’s something we really need to investigate.”

Each candidate was asked how he would characterize the state of race relations in LaGrange and if they believe the Racial Trustbuilding Initiative is working. McCamey said it’s clear there’s still a racial issue in the city.

“Since I’ve been running the last six months, I’ve had people overtly say, ‘do you really believe we are going to have a black mayor in LaGrange?’ And this is a real issue,” McCamey said. “I believe we have a racial issue, and it’s been this way for a number of years. If we look back 30 years ago when I was a child, we are still divided on where we live, in terms of where we go for our religious practices.”

McCamey said the racial conciliation group is a great way to start the dialogue, but called it a “small piece” of a bigger puzzle. He said January’s apology from city officials regarding Austin Callaway’s 1940 lynching was a step forward, but he wondered what’s next.

“I agree it was an awesome thing, but what’s the next step? The next step has not happened. That creates some resentment throughout the community. Both the white and black community have told me, what are we going to do next?”

Thornton said there’s no question that there’s a historic division among racial lines in LaGrange, but he said most cities in the south have a similar problem.

Thornton and the city council provided funding to help start Trust Funding Inc., and called it a success before noting there’s a lot more work to do.

“The historic division along racial lines occurred over hundreds of years, and it’s going to take more than two or three years to remedy that,” Thornton said. “I think LaGrange and Troup County, we should take pride in that we have become leaders in not ignoring the historic division, but actually trying to do something to address it.”

Both candidates gave the city an “A” for its ability to create jobs. Thornton said he’s most excited about the diversification in the new businesses.

“In the past year, we’ve had new announcements such as Sentury Tire and Badcock Distribution. We’ve had expansions of existing industries like Duracell and Jindal Films moving their corporate headquarters from New York. That’s a big deal,” Thornton said. “But we’ve also had hospitality sector jobs come on line. Six hundred new jobs coming with Great Wolf Lodge, jobs with the Marriott downtown, and we’ve had retail jobs. There’s a diversity of job offerings coming into our community. We have a low employment rate, and it’s about to get better. That’s something I think we can be proud of.”

McCamey said the city has done a “great job” bringing in industry, but he said he’s concerned that there aren’t enough people to fill those jobs.

“We have a challenge with our educational system. If we don’t have the workforce, we can bring in hundreds of thousands of jobs over the course of the next five or ten years, but we don’t have the people that can work the jobs,” McCamey said.

The candidates were asked about the city’s growth and how to maintain LaGrange’s character if it does grow larger. The question centered around Georgia Public Broadcasting’s show “Hometown Georgia,” which featured LaGrange and aired Monday.

The show ended with a resident saying she loves the city, but not to move here because she enjoys the small town feel of LaGrange.

McCamey said he wants to create a collaboration between district 1 and district 2.

“As you look at LaGrange, it is a tale of two cities. We talk about race relations, we talk about development, but are we truly developing the entire city?” McCamey said. “As the mayor, I would bring the aesthetics in district 2 up to par… If you come in on Lafayette Parkway, you come into a very different city. People see that. People recognize that. They understand it’s a tale of two cities. As the mayor here in this city, I will actually work on the aesthetics in district two.”

Thornton said he wants the city to grow because it’s the key to having the kind of amenities LaGrange is just starting to get. He said “if you’re not growing, you’re dying.”

McCamey said he believes the city should have “smart growth.”

“I think we need to get under control our education system, we need to look at our race relations and we certainly need to address our crime problem before we continue to grow as a city in terms of population,” McCamey said.

Both candidates said they support SPLOST. McCamey said the biggest concern he hears from residents is that the funds aren’t spread evenly throughout the city. Thornton said SPLOST is the key to adding amenities, like The Thread, in the city.

The candidates were also asked what role they should play in the school system. Thornton said the low reading levels of third graders in the Troup County School System is the most critical issue for families considering moving to LaGrange. He pledged his support for the system moving forward in any way he can help. McCamey said people should be “outraged” because nine of 11 elementary schools are operating below state average.

CORRECTION: The original story misnamed the Racial Trustbuilding Inc. We apologize for the error and are happy to set the record straight.

Learning how to do a traffic stop