Rosemont Elementary being treated for mold 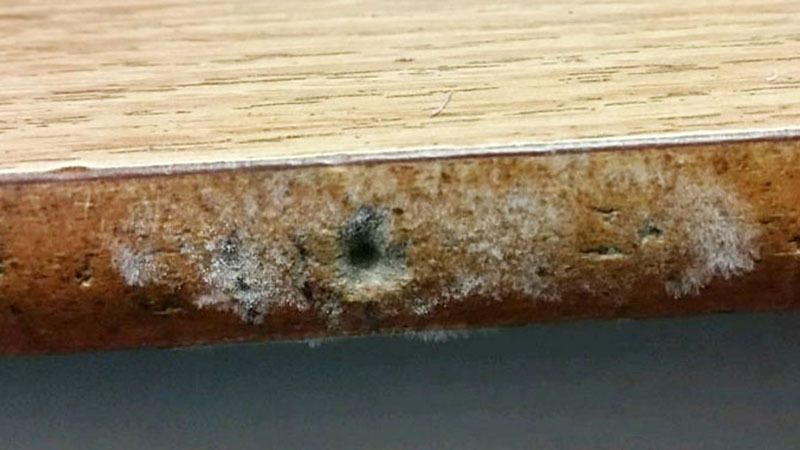 Mold is shown on a desk at Rosemont Elementary School. --Contributed

The hot topic at Monday night’s Troup County Board of Education meeting was expected to be proposed gymnasiums at two schools, but that was before heat and moisture stirred up a mold issue at Rosemont Elementary School.

The school board opened its meeting Monday discussing the mold and mildew problem at Rosemont, which started last Tuesday and involved several classrooms. The mold covered the walls, desks and other furniture, according to John Radcliffe, assistant superintendent over maintenance and operations.

“Maintenance had determined that warm, moist air had entered the building over the long break, either through mechanical error or human error,” Radcliffe said. “We focused on the mechanical error part. We were informed that several of the thermostats were in the off position for whatever reason, so we are focusing on either an electronic or mechanical error within the system.”

Radcliffe said the problem is penicillium aspergillus, a common form of indoor mold, according to the Center for Disease Control. Radcliffe said there has been concern from parents that black mold was found inside the building, but he said that is not the case.

Radcliffe said he was still waiting for a final written report from ServiceMaster.

“We did have verbal verification from the lab that we had a bloom of penicillium aspergillus. Again that’s a mold that grows inside a warm, moist environment,” Radcliffe said.

“While the majority of the mildew or mold was in the school, there was no children present,” Radcliffe said.

Radcliffe said the school system sent out a phone message to all parents of students at Rosemont Wednesday and that dehumidification equipment was put into the school Wednesday night.

“Almost all the classrooms had equipment,” Radcliffe said.

From Friday night until Sunday night, ServiceMaster used air scrubbers to cleanse the air of any mold, spores and pollen. He said HEPA style vacuum cleaners were also used.

The humidity levels were at 45 percent as of Monday, well below what they were last week, Radcliffe said. He said the goal is to keep the levels below 60 percent at all times.

He said a HVAC professional is monitoring the system all day to ensure the problem doesn’t happen again, and two additional custodians have also been assigned to the facility. The air conditioning system is not supposed to be turned off, a decision Radcliffe said was made in August.

Radcliffe said he is meeting with a mechanical engineer this week to discuss a more permanent solution.

“I think what we’re going to hear from them is they will recommend an energy recovery unit for the main part of the school,” Radcliffe said. “What that does is it treats outside air before it introduces it into the system. It will dry the air, then introduce it and you’ll have a better environment.”

As a follow-up to Wednesday’s phone calls, Radcliffe sent out a letter to parents on Friday.

“Please be aware that at no time was there any evidence of black mold. We know this is a concern from both parents and RES employees; therefore, we want to dispel the myth. We are also aware of comparisons to our experiences at the beginning of the school year,” Radcliffe wrote. “While we consider this mildew outbreak serious because we want a clean, safe environment for our students and employees, this instance is not to the same level as the previous event. The mildew levels are not as high.”

The earlier outbreak was before the school year started. Yolanda Stephen, director of public relations for the Troup County Board of Education, said some of the same areas were affected during the summer, but the problem was more widespread then.

“This bloom was nowhere near the magnitude we saw over the summer,” Radcliffe said. “We caught this early enough to take quick action and get it resolved.”

Stephen said the school was cleaned extensively before students arrived for the school year.

During the current mildew outbreak, Stephen said students of two affected classrooms were moved to the school’s media center. Since those areas have now been cleaned, Stephen students that were displaced are now back in their original classroom.

Board members questioned whether the school system had done an adequate job keeping parents up to date on the latest information.

“It sounds like your team is doing the right thing, but somewhere between alarming parents and informing parents — we haven’t found that sweet spot,” said board member Kirk Hancock to Radcliffe.

Radcliffe said most of the calls he received focused on black mold, but he said those concerns were unfounded.

“That’s the one that people are fearful of. That doesn’t mean people don’t have allergies to the penicillium aspergillus. They do, but not to the same degree,” Radcliffe said. “If it were black mold, we’d be shut down right now and putting these kids somewhere else.”

Board members also questioned whether parents were given information about how absences would be treated, especially considering some students might be more affected by the mildew than others.

“This is a new one. We haven’t crossed this bridge before, but to me, that’s a matter of a parent with the information, making what they think is the best choice for their child. As a school, we are going to work with them,” said assistant superintendent Karen Cagle.

The board of education meets again Thursday at 5:30 p.m.