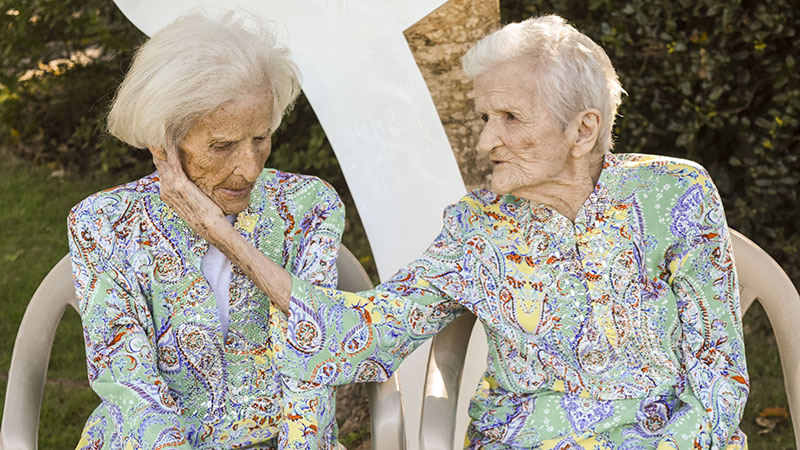 According to a 2014 study from the U.S. Census Bureau, only 0.02 percent of Americans reach 100 years old. Ruby Dommisse and Ruth Holliday reached that incredible milestone yesterday, while also joining an even rarer list.

Dommisse and Holliday are twin sisters and, at 100, are undoubtedly two of the oldest living twins in the world.  Their family threw a party at Dommisse’s house on Lane Circle Monday afternoon to celebrate the accomplishment.

“Be happy,” she said with a smile.

It’s hard to say how the twins stack up historically. Worldwide several sets of twins have celebrated the same milestone in 2017. The oldest living twins on record are Kin Narita and Gin Kanie, of Japan, who each reached 107, according to Guiness World Records.

Guiness lists the oldest, currently living female twins in the world to be Raymonde Saumade and Lucienne Grare of France, who are both 103 years old.

Dommisse is restricted to a wheelchair, while Holliday still gets around well for a centenarian. Both also have a little trouble hearing, but their overall health is impressive.

“She doesn’t even take any medicine — Ruth or her,” said Ruby’s son, Gary Dommisse. “They are both doing real well for 100.”

Gary said their good health has to do with working outside all their life.

“They were always working in the yard. She would bend over and pick all these leaves up,” Gary said of his mother while pointing around to different spots in the yard.

The sisters were dressed in matching outfits Monday. They took photos and had a big cake and a table full of food to celebrate the occasion with friends and family. The twins were born in Roanoke, Alabama, and Ruth still lives there.

Ruby has lived in LaGrange for almost seven decades.