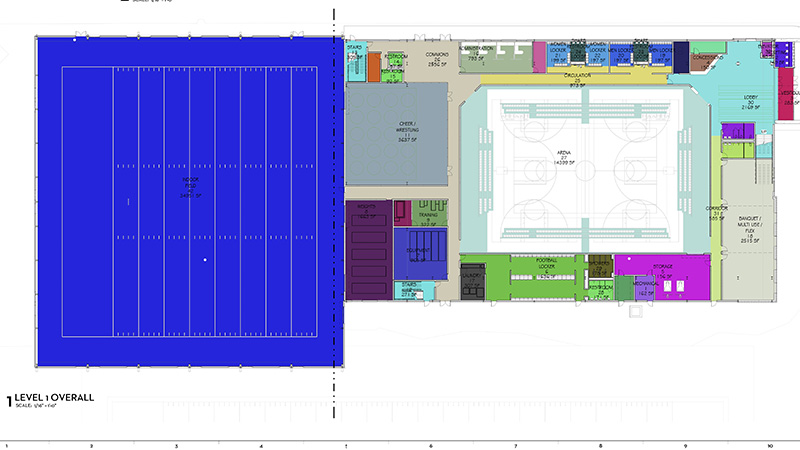 Plans for the gym at Troup High School are shown above. --Contributed

The Troup County Board of Education voted 5-2 Thursday to approve the construction of gymnasiums at Troup High School and LaGrange High School.

The gymnasium vote was tabled for two months in August after board members asked for more time to get all of the information needed to make an informed decision. Alfred McNair, Joe Franklin, Cathy Hunt, Allen Simpson and Ted Alford voted yes Thursday. Kirk Hancock and Brandon Brooks each voted no.

“I have gone back and forth on how I would vote tonight, but I have ultimately decided to go forth with the projects as currently designed,” Hunt said in a prepared statement.

The funding for the construction of both gymnasiums will come from E- SPLOST V. Originally, $18 million was allocated toward the project. However, the initial cost projection ended up being way off the mark and the board was forced to decide whether to contribute another $7 million for the project.

The vote Thursday approved a guaranteed maximum price of Ra-Lin Construction of $12,662,040 for Troup High’s gymnasium and approved a construction budget of $13,400,000 for LaGrange High’s gymnasium. John Radcliffe, assistant superintendent of Maintenance and Operations, said during Tuesday’s work session that the LaGrange High number does not include the cost of the land acquisition.

Until a contractor is named and geotechnical work is performed, there’s not a definitive cost for the LaGrange High project, but the board will vote on a guaranteed maximum price for that gymnasium at a later board meeting.  The original plans were edited to save costs and several more millions of dollars could’ve been saved by cutting two indoor, multiuse facilities, which can be used by multiple sports teams. The board discussed that dilemma during its previous meetings and during public forums in West Point and LaGrange.

In the end, the multi-use facilities made the cut, giving each school a gymnasium similar to what Callaway High School has.

Hunt said her vote came down to a discussion with a former educator in the community, who pointed out that the school system has traditionally had a habit of “under building” and then paying more later.

“As a staff member, who was affected in this way many years ago during a building project that meant a great deal to me and my school, I understand the value of that statement,” Hunt said. “We must strive to do projects right the first time, and we must provide quality facilities that are a source of pride for our students.”

Hunt discussed her concern about what the final cost will be, and others on the board echoed those worries.

“We’ve got some cost overrun that I’m concerned about, but we are going to build the facilities as close as we can to what we promised to the people,” said board member Joe Franklin.

“We will have to use every available capital dollar to build these gyms. This will eliminate flexibility to invest in other academic needs,” Hancock said. “The second major process failure occurred when the administration failed to notify the board that the facilities were going to be considerably more than budgeted. At this point, back in February I asked for an update. At that point, we could authorize the additional money to proceed. We never got that update… By the time the board was notified in August, we had no ability to influence the outcome. It was too late. This is another major process failure and is unacceptable in my opinion.”