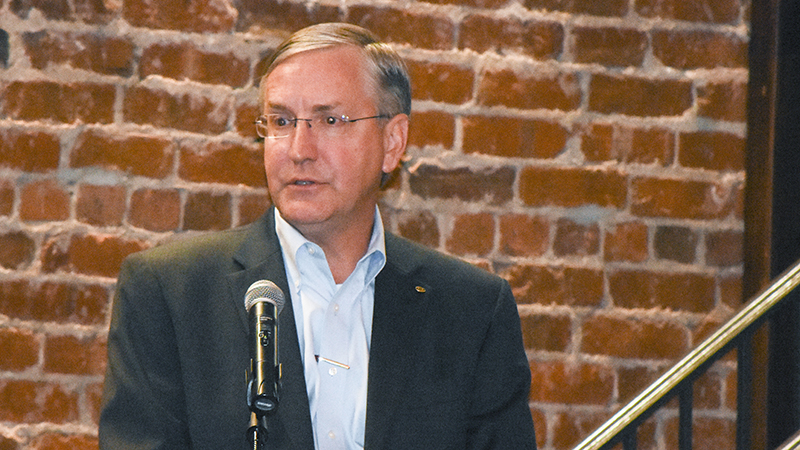 Kia Motors Manufacturing Georgia is slowing its production by approximately 300 vehicles per day, according to Stuart Countess, Chief Administrative Officer for KMMG.

Countess was the guest speaker at Tuesday’s LaGrange-Troup County Chamber of Commerce Early Bird Breakfast, and he discussed a myriad of topics, including the current state of the automotive industry nationwide, changes being made at Kia’s West Point facility and sales numbers.

Countess said hurricanes Irma and Harvey along with other factors have had an effect on sales and inventory this year across the board. Countess said Kia’s total U.S. sales are down this year compared to 2016, including the Sorento (down 9.7 percent) and the Optima (5 percent down) that are manufactured in West Point.

“There certainly have been challenges. I mentioned hurricanes before,” Countess said. “When things like that happen, if you consider that 60 percent of our product leaves by train and you get trains that are stuck somewhere due to this hurricane, you have to accommodate for that. Can that drive inventories up? Yes, absolutely it can, and it takes you a while to recover from those incidents.”

Countess said several changes were announced to employees of the West Point plant last week, including a decrease in production. Kia will now produce 300 less vehicles per day to try to alleviate an overflow of inventory.

“The question is, what does that mean?” Countess said. “We have to go back and rebalance our production processes, which is not an unusual thing. We do that on a pretty consistent basis because we are trying to level out the production side. Some OEMS have decided they are going to take three weeks, six weeks, three months where they absolutely shut the factories down. We’ve decided not to do that.”

Kia will continue to operate at three shifts per day, five days per week.

Countess said the changes would not affect the employment status of any Kia Motors Manufacturing Georgia employee. However, during his speech at the breakfast, he said it was “not an issue with zero impact by any stretch.”

The LaGrange Daily News followed up with KMMG for clarification in the days following the breakfast.

“While the employment statuses of KMMG team members will not be impacted by this rebalance, there will be a need to release some of our temporary workforce,” Countess said in a written response through KMMG. “The temporary workforce jobs affected are production functions distributed throughout the various shops at KMMG.”

Prior to the upcoming line speed reduction, Kia produced approximately more than 1,400 vehicles per day. Countess said the reduction in production will stay in effect for the foreseeable future.

“Since starting production November 16, 2009, this is the first time KMMG has experienced the current market conditions,” Countess wrote to the LDN.

“Ultimately, we feel that these adjustments will help KMMG to enter 2018 in a stronger position.”

Countess noted during the breakfast that a non-production date of Nov. 22 will be a paid date for KMMG employees in recognition of the quality achievements from J.D. Power.

“Kia gives you more in this product than probably anyone else for the price you pay, and they are all safety related type items,” Countess said during the breakfast.

Countess also discussed the different initiatives Kia is involved in, such as THINC Academy.

He said he’s looked at how many states promote education and none compare to the state of Georgia.

“Manufacturing is a clean industry. Everybody has a little difference in what they do, but we have to change the minds of parents and other individuals that this is a good place to be, and there are different opportunities from working online, to working in maintenance or some type of technical position,” Countess said. “There are numerous opportunities and the salaries and benefits that go with them can’t be beat.”

Sweetland hosts “I am Holden On”