Sweetland hosts “I am Holden On” 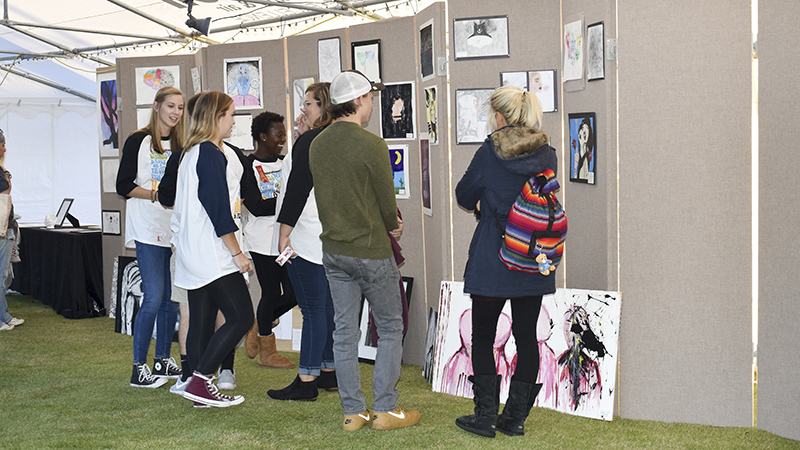 Volunteers look at the art show at Sweetland Amphitheatre Thursday night. The pieces in the art show depict aspects of depression and were created by local high school students. --Alicia B. Hill

On Wednesday night, a crowd gathered at Sweetland Amphitheatre to learn about mental health and watch a film based on the life of one resident who struggled to keep his mental health battle a secret.

“I am Holden On” is a deeply moving film due to its insight into high school football culture, drug use and even recovery centers, but the film holds a special significance for LaGrange, where the movie was filmed.

“To do this here at this homecoming, it is a reunion,” said Tamlin Hall, the filmmaker over Granger Pictures and the founder of IAMHOLDENON. “It is a family reunion. This is where Holden [Layfield] lived, so we are honoring him throughout the country right now on screenings, but this is really it.”

Hall personally knew Holden and credits Holden with saving his life through the simple yet crucial act of caring and understanding.

“He was someone who treated me like a human being when others bullied me,” Hall said. “Holden’s humanity is inside of me. I’m going to forever be the voice for those who don’t feel like they have the opportunity, like I did.”

“I am Holden On” continues Holden’s legacy of caring by fostering a conversation about mental health.

The common hope for those involved in the project was that no one would have to face what Holden faced alone, and there is a strong belief that education and community support can make that hope a reality.

“Mental illness affects about one out of every four people, so there are people and families and friends, and they need somebody to reach out to them because, like Holden, he kept it inside, and he didn’t share, and we didn’t know what was happening to him — so once you see somebody that might be struggling, just go up and talk to them,” said Bob Layfield, Holden’s father. “Just say, I care, and I am concerned about you, or would you like to talk? Anything. Just pat them on the shoulder, just to let them know that they are not alone. If you see someone who you think is alone, reach out to them.”

According to Layfield, the community did just that for his family after Holden died.

“LaGrange, when Holden died, just surrounded us, and I can’t begin to tell you the things they did for our family to help us get back on our feet,” Layfield said. “To go from then to now, here they are again, and it is not just LaGrange. It is the Callaway Foundation that made such a fantastic contribution to the movie.”

That support came in different forms, but for Layfield, the stories that people shared after Holden’s death were some of the most meaningful gifts.

“When Holden died — about a year after he died — I wrote a letter to the LaGrange Daily News, and I asked if anybody had any remembrances of Holden,” Layfield said. “Any talks or stories that they wouldn’t mind sharing with us. We received over 36 letters from the community. Some from people we didn’t know. They are like pieces of gold to go back and read, and each one of them told a story about Holden that we would never have known, just how much he meant to them. It is just unbelievable.”

The event was free to the community, but donations will go toward education on mental illness, substance abuse and suicide prevention.

“It is a free event, thanks to all our sponsors they were able to make this a free event, but we have a suggested donation of $2,” Sweetland Director Becca Eiland said. “Those donations will go toward the IAMHOLDENON.org nonprofit. Its goal is to bring that education into the schools, to community partners, community organizations that educate people about suicide prevention and mental illness, substance abuse and give them that curriculum that they can be able to talk about it in a fun, creative, compelling way.”

Proceeds from concession purchases also went to IAMHOLDENON which is a 501c3 organization.

If you missed the film, but would like to watch it, it will be touring the country for the rest of the year at various locations before becoming available for purchase online in 2018. The film can also be viewed by civic clubs and other organizations by request by contacting iamholdenon@gmail.com. To learn more about the film or the charity, visit iamholdenon.org.