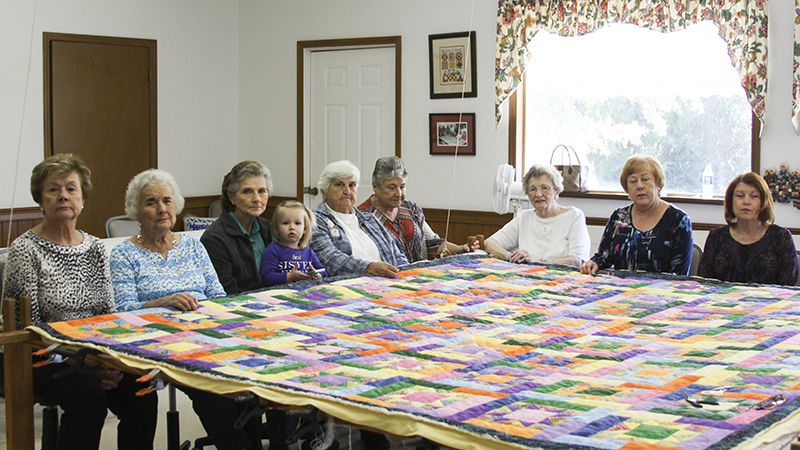 Sue Thompson, Carol Cadenhead, Reba Smith, Linda Cody, Linda Arrington, Betty Pitts, Debbie Starr and Beth Bailey sit around a quilt that they have been working on for the quilter’s bazaar. — Alicia B. Hill

The event originally started out as a Christmas bazaar and will still be a great way to get a little bit of early holiday shopping done with more than 20 local vendors as well as a variety of food for sale at the event. The hand-sewn quilts are sure to be the most spectacular part of the event though thanks in part to the quilt display that will be in the church’s sanctuary during the event.

Many of the members of the quilting group have been part of the group for years, and in some cases joined even before the bazaar itself first began.

“That was our first year, but we started quilting in houses before we came to the church.”

The group estimates that they have been making quilts for roughly 50 years now, and the sawtooth square quilt that they were putting the finishing touches on Thursday will be part of a raffle at the event.

“We started here after the home demonstration club stopped, and it was suggested that we make a quilt and embroider it for each member and call it a friendship quilt,” Reba Smith said. “That is how, really it got started here at the church.”

The proceeds from the bazaar will go toward the church, which they are generally passes funding on to charities like Samaritan’s Purse and Relay for Life.

The event will take place on Saturday, Nov. 4 at 8 a.m. with the drawing at 2 p.m. Entry is free to the public.