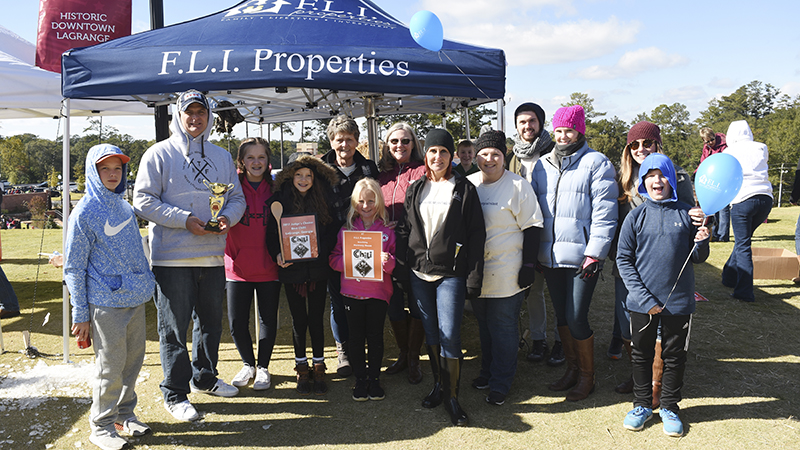 They say the best time for chili is when it’s cold outside, and Mother Nature more than delivered her side of the bargain during Sunday’s Chili Cook Off at Sweetland Amphitheatre.

The dozen teams that participated in the cook off did their part as well, delivering different flavors of the meaty stew.

“Our secret is just planning,” said Tanya Batchelor with F.L.I. Properties. “We won’t give out our recipe. We use the same one every year.”

F.L.I. wore shirts quoting Talladega Nights character Ricky Bobby. They said “if you’re not first you’re last,” but they were covered up by jackets most of the day due to the cold weather. However, they served as a reminder of how serious the group takes the chili contest each year.

“We look forward to it. It was a lot of fun this year despite the cold and the wind,” Batchelor said.

“The secret really is the group that does it. You just can’t do it by yourself,” said Alex Beall with Jackson Heating & Air.

Each team in the chili cook supporting an organization. Proceeds were split after the event expenses were covered. The top prize, $300, was given to F.L.I. Properties, while both Blessed Realty Group and Jackson Heating & Air won $200 apiece.  F.L.I. was cooking to support Harmony House, Blessed Realty Group’s proceeds will benefit the American Foundation for Suicide Prevention & Awareness and Jackson Heating and & Air’s portion will go toward The Discovery Cottage.

While those teams were at the top, other teams also braved the cold to throw together their own chili recipes.

“I’ve actually cooked and I think this is my fifth year here,” said Trinity Pike, who was cooking for Unity Baptist Church.

“I changed up the recipe a little bit this year. It’s funny, you find out how people like chili. People around here like it a little sweeter, not quite as hot.”

Lori Smith said the American Home Shield team had held their own, in-office chili cook off to determine which chili would be used for the cook off.

“The person that wins the people’s choice at our center, we use their recipe to cook the chili, so we’ve already raised $470 for the United Way, just doing a chili cook off at our center,” Smith said.

After the chili cook off hundreds of children lined up to trick or treat in Sweetland’s parking lot. Dozens of vehicles lined up to give out candy.