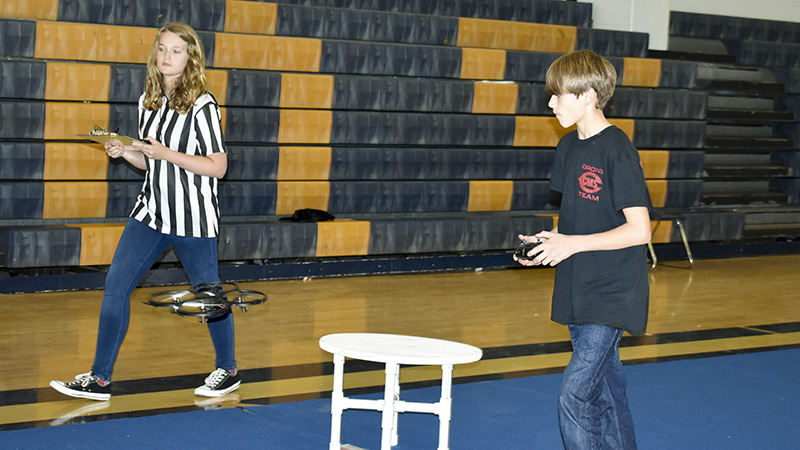 And we have take off.

On Monday, drone teams from Long Cane Middle School and Callaway Middle School competed in the first ever drone race between the local schools. Both the indoor and outdoor courses proved challenging, though not impossible, for students to complete.

During these races, students had the opportunity to gain hands on experience with the drone technology that is expected to make up more than 100,000 new jobs by 2025, according to a 2013 report by the Association for Unmanned Vehicle Systems International. Some drones soared through the courses while other drones seemed to struggle against their pilots over which direction they should go, but in the end students from both middle schools had fun and may have even learned something.

“It is a good opportunity for them to practice doing something with a new technology field with lots of new careers,” said Chris Tatem, the drone team coach from Callaway Middle School. “So, they have fun, and it is also a break away from the academic stress of school.”

The races are a part of efforts by Troup County School System to implement Science, Technology, Engineering, the Arts and Mathematics (STEAM) education into the schools in partnership with the International Center for Leadership in Education.

“Overall, with the whole program it has been a really big success,” said Chris McCalla, the coach for the Flying Cougar Drone Racing Team from Long Cane Middle School. “Of course, the kids love flying and getting outside.”

The program is about more than fun though, with a heavy focus on aeronautics education.

“They are still learning and not only about flying drones. They are learning about aviation. They are learning aerodynamics. We are talking about some law and ethics this week. We are going to learn aviation history, so it is kind of half and half. They get to fly, but we also do a lot of academic stuff to teach them how drones fly and what is involved in it, and get them interested in it because it is a growing industry.”

According to LCMS Principal Chip Giles, about 200 seventh and eighth grade students will be able to take part in the school’s drone program this year at Long Cane alone, and he is hopeful that soon other nearby schools will soon be able to compete in the competitions as well.

Gardner Newman Middle School also has a drone team that is scheduled to compete with Long Cane Middle School.

The winners of the Speed Flying Division were Andrew Levens and Kameron Breed, who tied for first, with Sam Corley taking third.

The winner of the Team Speed Flying competition was Long Cane Middle School with 131 points.