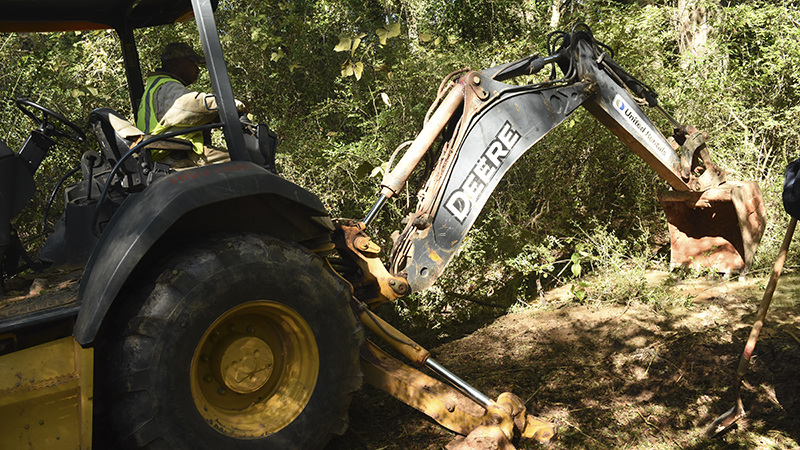 Crews worked on a water leak in Hogansville Monday morning. The leak was discovered in the woods between Boozer and Poplar Streets. --Daniel Evans

HOGANSVILLE — City workers in Hogansville spent Monday repairing a massive water leak, which resulted in a boil water advisory for any residences affected.

The leak was discovered in the woods between Poplar and Boozer Streets from a pipe that had no current documentation from the city. City Manager David Milliron said the Pine Street tank emptied an estimated 75,000 gallons of water within minutes.

The west side of the city of Hogansville was affected, leaving some without water and others needing to boil their water as a precaution. Jose’ Vidal, Water Superintendent for the City of Hogansville, estimated 1,000 customers were affected by the outage.

As of 2 p.m. Monday, all water service had been restored. The boil advisory is set to stay in effect for at least 48 hours, Milliron said.

“The boil advisory is pre-emptively done. We’re not saying the water is bad,” Milliron said.

“We’re just going to say as a cautionary measure to start boiling your water or use bottled water until further notice, until we can absolutely say our water is absolutely stable, safe to drink and OK.”

The boil water advisory essentially means exactly what it sounds like. It means anyone under the advisory should boil tap water for at least one full minute prior to drinking it or using it for cooking. That includes water used for brushing teeth, making ice, washing raw foods and pet water.

Any ice that was made during the time the advisory was issued should be thrown away.

After the advisory is lifted, those affected should run all cold water faucets in their home for one minute and flush automatic ice makers by making three batches of ice.

There are no restrictions on doing laundry or for bathing.

The advisory remains in place until test samples show the water is safe to drink. The tests for bacteria typically take 18-24 hours to complete, Milliron said.

Milliron said public works crews believe a movement of large rocks beneath the pipe caused it to break. The six-inch water main was six feet below grade, Milliron said. He said the break in the pipe was almost three feet long.

Milliron said that there was no documentation of the line, since it is very old.

“That’s how old the line is, the city does not have it mapped. It’s not a matter of just pulling out something and saying where does this line go?” Milliron said.

The city was first notified of the leak at 5 a.m. Monday morning, Milliron said. He estimated 30 calls had come in about the leak by around noon on Monday.

“I’m surprised we haven’t received more calls than that,” Milliron said. “I would’ve thought the phones would’ve been ringing off the hook.”

A backhoe was used to clear the land, and once the leak was found, crews used it to carefully start digging down to the pipe. At around noon, the site of the leak had been located.

Milliron said he knew it was not convenient for many, but he said the city worked quickly to resolve the issue as quickly as possible.

“Leaks on aging infrastructure are going to happen. It’s no different than a water leak that occurs in your own house. It’s not something you can plan for,” he said. “But we have all hands on deck right now trying to isolate it.”