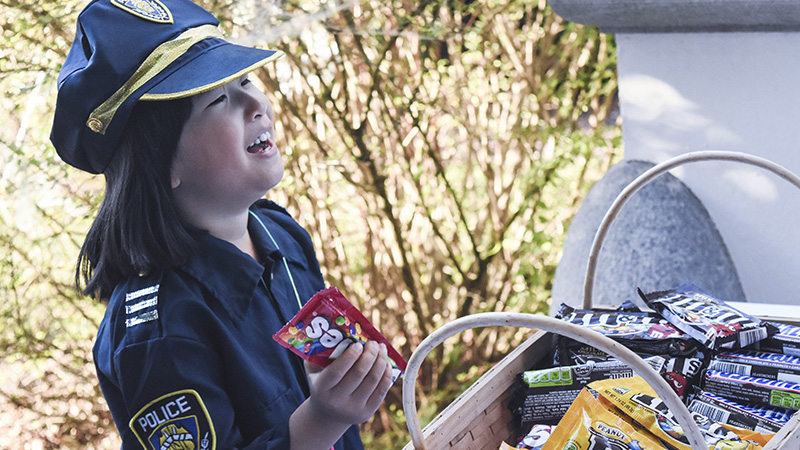 Hills & Dales Estate has been giving out candy on Halloween for so long that it’s just become the norm for the holiday. Hundreds of children run up the hill to get their pick of a full size candy bar — one of the biggest treats any kid could get on Halloween.

“This tradition goes before Hills & Dales was public,” said trustee Ida Russell. “When we came up here as kids, we would help our grandparents give out candy.”

Through the years, several grandparents who received candy at Hills & Dales as children have brought little ones up to continue the tradition. Russell was expecting more than 500 candy bars to be given out Tuesday night, although it’s always hard to guess exactly how many children will show up.

As the sun started to set Tuesday night, a steady stream of children had continued coming up to grab their candy bar. They’ve run out of candy before.

“[I enjoy] seeing the kids’ faces. The kids get so excited. They love being up here, they love seeing this house and of course they love the candy,” Russell said.

Down the road at Bellevue, around 350 children were expected to trick-or-treat at the historic home. Trick-or-treating at Bellevue was hosted by the LaGrange Woman’s Club and has been ongoing for around 10 years now.

“It is for us to do something fun together and see the children all dressed up,” said Kathren Fogg, a member of the Woman’s Club.

The club usually gives out candy to between 350 and 400 children every year, and even early in the night it was clear that the steps of the antebellum home would feel the stomps of many storm troopers and princesses by the end of the night.

“It is early, but we expect this,” Judy Bledsoe said. “As it gets dark, people start to come. They’ve been other places and they come here. I am amazed — I haven’t seen any this year, but — I am amazed by the homemade costumes. The creativity of the parents to do that. It is just fun.”