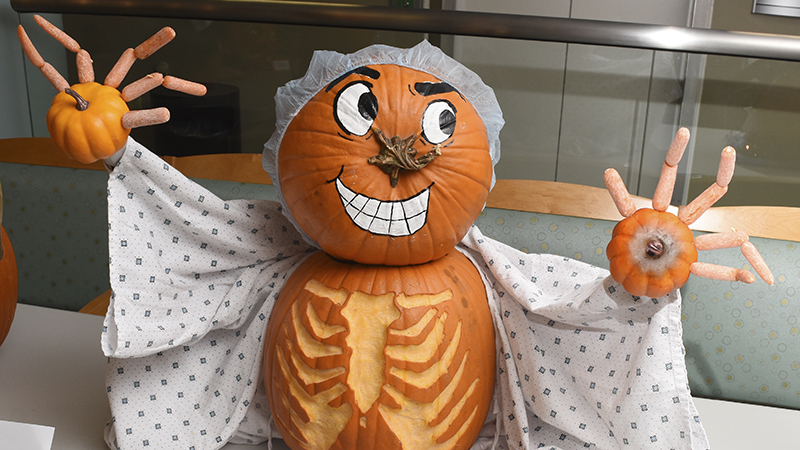 All it took were a few pumpkins to make visitors smile at Emory Clark-Holder Clinic at LaGrange Tuesday. The clinic continued a Halloween tradition with its annual staff pumpkin carving contest, and the final results were displayed in the lobby for all to see.

The contest is in its third year and brings all of Emory together for a fun competition. Each department is allowed to submit a pumpkin display into the contest, and each year it feels as if the best carvings top the previous years.

“It’s part of our employee engagement. This is a way to enjoy what we do every day and also have a little fun outside of that with building relationships and also doing that in turn where we can better serve our patients,” said Eric Blackman, Director of Operations at Emory at LaGrange.

This year’s winner was the Emory Ambulatory Surgery Center, which used two pumpkins to create a display of a doctor performing a colonoscopy on a patient. The display actually worked too, showing how a colonoscopy would be performed.

Second place went to radiology for a carving of the carriage from Cinderella, and third was Risk Management and Clinical Services for a display featuring two pumpkins, where one was holding a spider and one was terrified.

The contest is all in good fun, and it’s something many look forward to each year.

Of course, as doctors and nurses, many wanted the pumpkin carving to show what they do in their department.

“We tried to make it realistic to what actually goes on during a colonoscopy,” said Cathy Boddie, who helped with the Ambulatory Surgery Center’s pumpkin. “We worked on a little bit Friday and then finished it this morning.”

Tiffany Batchelor said the radiology department enjoys the contest, but joked they always seem to finish second. She said it allows the community to see a fun side of the staff at Emory.

“We have to be so serious all the time, and I think the patients enjoy it,” Batchelor said.

Other pumpkins included a surgeon wearing scrubs that had pumpkins for hands, a pumpkin painted as a gum ball machine and VeggieTales, which included a basket of different vegetables.

More than a dozen pumpkins were in the contest this year, which is in its third year.

The winners of the contest receive movie tickets, gift cards or a pizza party.