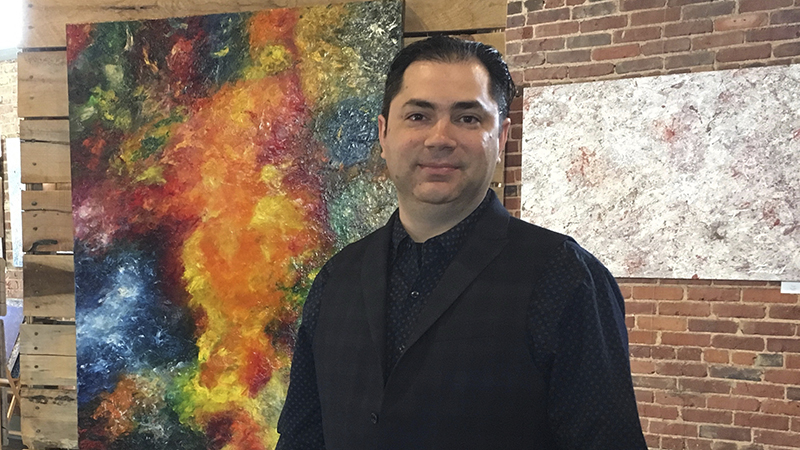 Jaasiel Barrientos of LaGrange is being showcased at Artisans on the Square in Greenville with a solo exhibit now through Nov. 18.

The exhibit opened with a reception Friday night and includes 41 abstract paintings, plus several limited edition prints in smaller sizes.

His paintings focus on the interaction of color and demonstrate experimentation with color and texture using a combination of oil and acrylic to achieve the desired effect. His goal is to inspire people to get involved in art, stir their emotions and trigger their imaginations.

Barrientos relocated from Mexico to LaGrange in 2000 when he visited his brother and sister-in-law who were teaching in Meriwether County and later in Troup County. He liked LaGrange, stayed and began working at Cisco’s Restaurant.

His winning personality and ready humor earned him a sizable fan club in his 16 years at Cisco’s. Many of his fans came to the opening, including Mayor Jim Thornton and his wife Corrine and Artist Annie Greene and her husband Oliver. Barrientos and gallery owner Linda Wilburn are delighted to report that six paintings were sold at the opening reception.

In 2016 Barrientos focused his attention on promoting Art of Jaasiel and also began working at Artisans on the Square and The Print Shop Gallery, the two fine art galleries in Greenville.

Jaasiel is an active member of Visual Arts Alliance of LaGrange and Arts Meriwether.