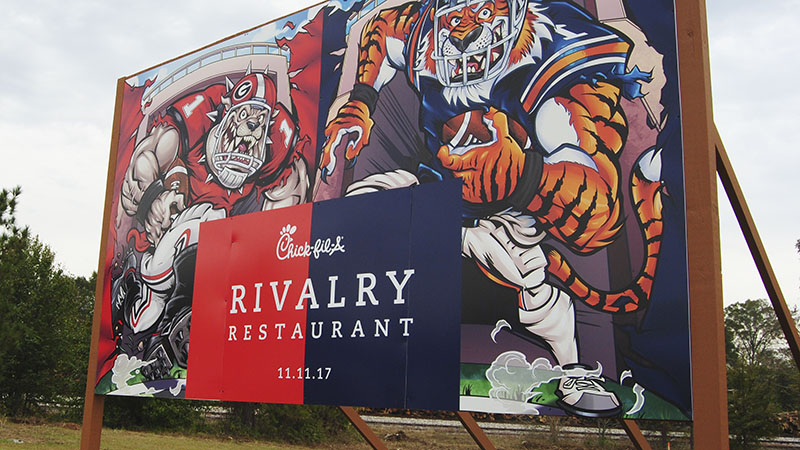 The field adjacent to Valley Vision off Third Avenue will be the host site of a Chick-fil-A “pop-up” restaurant for the Nov. 11 clash between the Georgia Bulldogs and the Auburn Tigers. --David Hamilton

LANETT & WEST POINT — Free food and a giant TV displaying one of SEC’s greatest rivalries — all of that is in store next Saturday for a “pop-up” Chick-fil-A restaurant to be hosted at the Alabama-Georgia state line.

As a much-anticipated game between No. 1 Georgia and No. 14 Auburn approaches, Lanett Mayor Kyle McCoy and West Point Mayor Steve Tramell Wednesday announced the event will take place Nov. 11 in the area adjacent to Valley Vision Center. The festivities aim to celebrate the 125-year rivalry between the teams. The event is scheduled to begin three hours prior to kickoff.

The officials welcomed both Bulldog and Tiger fans alike to visit either Lanett or West Point city halls to pick up a wristband, which will allow “priority access” into the event site. Wrist bands will be available for pickup beginning at noon on Friday.

“We’re going to be bringing Auburn, Georgia and Chick-fil-A fans all together for free food, fun, entertainment and a big-screen TV to watch the game on — and I mean a big-screen TV,” Tramell said.

Once fans have gained entry to the site, they will have access to some of the signature items off the Chick-fil-A menu free of charge.

“You won’t need to be bringing anything as far as eating because Chick-fil-A is going to be providing it all to you,” McCoy said.

Though McCoy and Tramell recommended picking up the wristbands at either city hall, they also said those wanting to attend could pick up a band at the site of the event as well.

The event aims to be family friendly and will feature games and activities for fans of all ages, officials said.  Additionally, some special guest appearances are reportedly in store as well, though McCoy and Tramell said the identities of those guests will be a surprise.

“There’s so many people from Auburn that could come, and Georgia’s the same way, so I’m sure it’s going to be a big surprise,” McCoy said.

Tramell took the opportunity to tease the event even more.

“You’ll have to come to the event to find out,” he said.

Each public official weighed in on the nature of the Tigers-Bulldogs rivalry, with Tramell rooting for Georgia as McCoy flaunted his Auburn shirt.

“It’s not a vicious rivalry,” McCoy said. “Kind of like between the cities of Lanett and West Point — it’s more friendly. If there’s anything that I ever needed from Steve in the city of West Point, I don’t have a problem or hesitate and pick up the phone to call him and he’d be happy to do it, and the same with him on our side.”

The actual time of the game will be either 3:30 or 7 p.m. EST, which will be announced Monday.

Those planning to attend may bring a blanket of a camp chair, though officials noted seating will be available on a first-come-, first-served basis, as will be parking. Fans are encouraged to carpool to the event for ease of access.