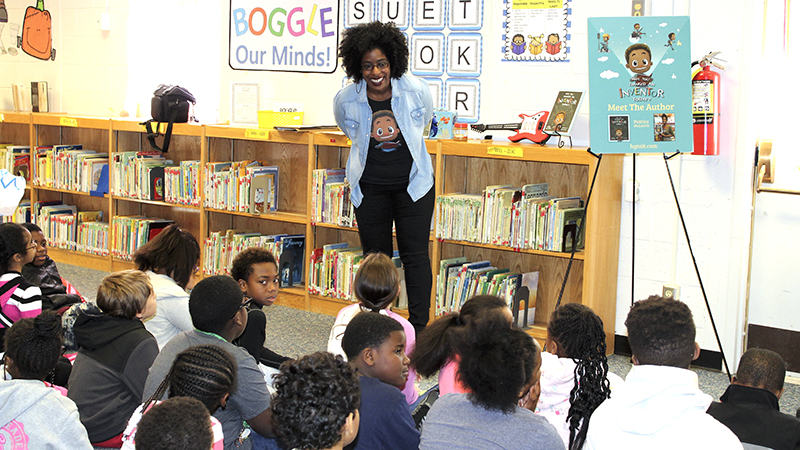 When well-known children’s author Patrice McLaurin entered West Point Elementary, her bouncing personality and hair grabbed the third and fourth grade student’s attention before she even began to speak.

As the morning’s guest speaker at West Point Elementary and Berta Weathersbee, she pulled out her rolling cart that housed everyday inventions and greeted the students before she even brought up her bestselling book “Have You Thanked an Inventor Today?”

While the bubbling students thought she was there to read, she came with a bigger purpose — to share inventions and inspire young learners that they can be inventors at any age.

The motivation to write “Have You Thanked an Inventor Today?” started at home with her own family and the fact she wanted to impart positivity into many of the African American children she came into contact with daily.

“The only thing I was thinking when I wrote the book was that I wanted to do my part to really raise the vibration of our young people,” said McLaurin. “I think that the way African American children are represented in the media would be indicative of them being in a low place. However, I think it’s a misrepresentation and my goal was to create a different type of media, something they can see themselves in and be excited about and be proud of.”

McLaurin continued, “That’s why I wanted to make certain that all the inventors that I put in the book were inventions that were really relatable to young children so I included things that they use on a daily basis like the lunch box or the pencil sharpener.”

Of her visits to elementary students, she said, “I enjoy reading to them and see their eyes brighten when they find out about young inventors. I have met some brilliant scholars who are eager to learn. They have scratched the surface and want to know more. I am here to encourage them that they can put their imaginations to work because they are never too young to do something great.”

Noted as a Microsoft selected Science, Technology, Engineering and Math read, McLaurin said she just wanted to create a book that featured everyday inventions created by African Americans but she is proud it fell into the important study of STEM.

Her stops at West Point and Berta Weathersbee Elementary Schools is a part of the literacy initiative that is a top focus for the Troup County School System.