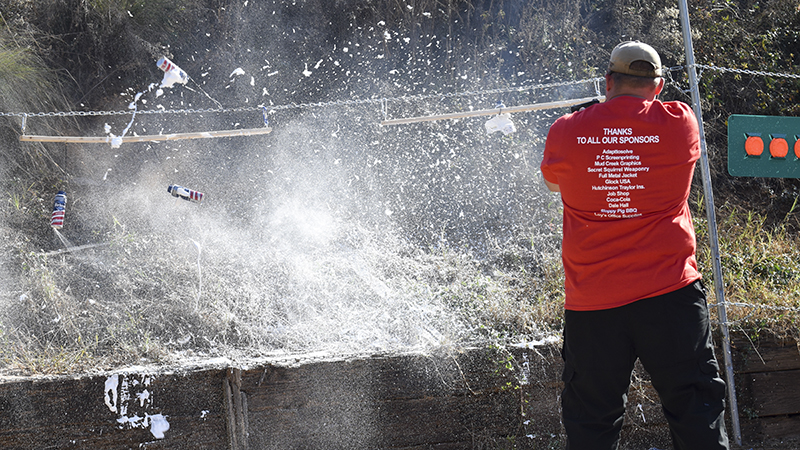 Who is Troup County’s Top Shot?

On Saturday, first responders from across the county gathered to participate in the third annual Troup County Top Shot event, which aims raise funds for Relay for Life and build relationships between local departments. Mike Jones from the Troup County Roads Department won first place in the competition. William Jones of the LaGrange Police Department finished second.

Woodruff was the best shot of this year’s competition between the county’s two current police chiefs and himself. West Point Police Department’s Chief Tony Bailey recently transferred to Powder Springs, so the WPPD did not have a chief in the competition.

Top Shot is one of several Relay for Life related events that local departments and offices take part in, and for many, it is a personally significant cause.

“Anytime that we can come together with the other agencies, and we can raise money for this charity, Relay for Life (is important),” Hogansville Police Chief Brian Harr said. “I don’t think there is any family, or any people who this doesn’t effect, that cancer doesn’t effect. Right now, we are dealing with it in our family on my wife’s side.”

The competition raised an estimated $500 for Relay for Life this year, but beyond those fundraising efforts, participants hope the event will benefit the community in other ways.

“It is for a great cause and anytime that you can get together with your colleagues from different agencies and different jurisdictions that helps the network, that ultimately helps us provide better service as we reduce the barriers that sometimes, jurisdictional lines create,” LaGrange Police Chief Louis Dekmar said. “So, separate and apart from the fundraising is just the opportunity to spend time with good colleagues, and of course the sheriff is to be applauded for organizing this each year.”

That opportunity for the departments to connect with each other and the community was precisely why Troup County Top Shot was started three years ago.

“I used to watch Top shot on TV, and I thought what if we could do a Top Shot and invite the city, the C.I. (correctional institute), the fire department, the ambulance people, everybody in public safety,” TCSO Office Manager Joy Burnham said. “And wow, I knew from the first year that this was a good thing.”

There were 15 participants in this year’s competition, but organizers would most like to see community involvement both as fans and participants as the event grows in the future. Fun targets and a safe shooting environment have been provided at the competition for specifically that purpose.

“The interest in the community has grown on the spectator shoot, so we’d like to grow that too,” Burnham said. “We’d like to get spectators, civilians to come up here under a controlled situation where we provide the gun, and we have someone standing by where it is perfectly safe to let a 10-year-old shoot, and let them shoot against their mom, their dad, their grandpa, their brothers and sisters. That is what it is all about, and it is fun to shoot stuff that blows up or sprays out.”

Adapttosolve sponsored the event and Secret Squirrel Weaponry provided ammunition for the event.