Suspect in hit-and-run in custody

When George Allen’s family arrived at a press conference on Tuesday morning, they were just hoping for some new information on the hit-and-run that killed Allen on Friday night, but what they got was closure.

The Georgia State Patrol took a suspect into custody in the case on Tuesday just before the press conference. For Allen’s family, the development brought an immediate sense of relief.

“It is wonderful news,” said Patsy Allen, George Allen’s wife of 22 years of the arrest. “That is one prayer answered. That means everything to me.”

GSP was able to locate the suspect thanks to a tip regarding a damaged vehicle that matched the description of the vehicle that was seen driving away from the scene.

“We got a tip first thing this morning, and we are very proud to announce that we have someone in custody,” said Sgt. Maurice Raines, GSP post commander.

The tip came through the Troup County Sheriff’s Office on Tuesday morning, and the information was verified with the Troup County Tax Commissioner’s Office. When GSP arrived at the residence where the vehicle was located, officers were able to verify the damage and vehicle type and took a suspect into custody based off of information from GSP’s Specialized Collision Response Team.

“There was a crash on Pyne Road on Friday night, and we called our Specialized Collision Response Team and contacted them,” Raines said. “They advised him (the officer on scene) to seize and collect any evidence that was out there on the scene. Fortunately, there was a headlight out there, and the Specialized Collision Response Team had the lens analyzed. It came back to a possible 2007 or 2008 Dodge Ram 1500 or 2500. A dark-colored vehicle was what a witness told us it could be, but it is very difficult to know when it was dark.”

According to Allen’s family, he regularly walked on the side of the road to the store to purchase lottery tickets in the evening, and this was the first time that he encountered trouble on the road.

“People don’t realize that it can happen to them,” said Jim Allen, George Allen’s brother. 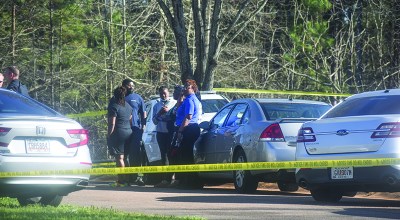