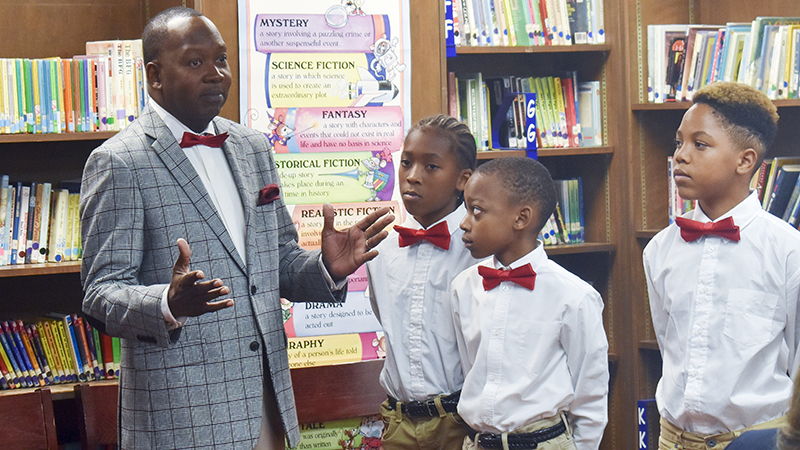 On Tuesday, the LaGrange City Council recognized students and staff that have used Empowerment Wednesday to set an example county wide.

Empowerment Wednesday encourages third, fourth and fifth grade boys at Whitesville Road Elementary School to dress up in a button up shirt, khakis and a red tie on Wednesdays. Some second graders also joined the program last week. Some of the students from the program came before the council on Tuesday during a work session that was held at WRES in order to recognize the students and their achievement.

“What you see standing before you this morning is simply the result of an idea,” said Jerome Cofield, a Troup County School System Paraprofessional at WRES. “After being hired to work for Troup County, one day I thought, ‘hey, I want to see if some of the boys can wear a tie with me.’ I wear a tie to work every day, and I thought it was going to be very hard to do, but the moment that I put that thought and that idea out there, they immediately jumped on it, and we grew overnight.”

Cofield has been at WRES for three years now, and the progress of students taking part in Empowerment Wednesday has been noted in both city council meetings and school system press releases. According to Cofield, roughly 125 students were taking part in the program at the end of the 2015-2016 school year, and they hope to have more even more in the program by the end of this school year.

That help came in the form of teachers and community leaders providing a solid example for students by showing up in their own ties and helping students with ties. Representatives from the Troup County Sheriff’s Office, the LaGrange Police Department and the City of LaGrange have all provided assistance with the weekly event.

“Twice now I’ve had the opportunity to come out on Wednesday mornings at 7 o’clock and work with many of y’all,” Mayor Jim Thornton said. “I recognize y’all, I don’t know if you recognize me, but I’ve been out here a couple of times helping tie ties. What a great group of kids. I appreciate what you are doing and have done for the past couple of years through this program. It really is exciting to see.”

Thornton was impressed by the improvements that the school has seen in terms of referrals and other disciplinary concerns, but he also said that he was impressed by the students themselves, noting that some fifth graders had expressed a desire to carry the program with them into middle school.

“That is a testimony to what leadership is all about,” Thornton said. “If this is a meaningful program that has meant a lot to you in third, fourth and fifth grade, when you go to sixth grade in middle school, you can become the leader that you are all going to be one day, but you can start it. You can take action and actually make that happen to improve that particular setting as well. So, I was very impressed by that.”

According to Cofield, the program is largely based on what he knows he needed when he was in elementary school.

“I became what I needed when I was their age,” Cofield said. “All I wanted was an image or a picture of someone standing in front of me (as an example), and so that is what I became.”

That example has resulted in drastically decreased referral rates for disciplinary concerns. In August 2016, before the program began, WRES had 39 referrals. By May 2017, WRES boasted decreasing that referral rate to just two referrals with Empowerment Wednesday. Additionally, the College and Career Ready Performance Index scores for the school have improved from 69 last year to 80 out of 100 this year. WRES’s CCRPI score for the prior year was 55.

“They’ve done great things in a short period of time,” TCSS Superintendent Dr. Cole Pugh said. “Because of the effort of leadership and their staff, good things are happening here.”

The decrease in behavior concerns and test score improvements were not the only improvement though.

“Not only do we see a decrease in behavior, it is relationship building with our parents as well as our students,” WRES Principal Debra Brock said.

Empowerment Wednesday has received community support from local groups like Lookin’ Good who orders and provides a discount on ties for the program, as well as other stores and individuals, and the city council reaffirmed their support for the program at the meeting.

Besides the weekly events where students dress up, the program has featured several activities designed to build up the students, including a father/son retreat, a trip to a professional basketball game and a father/son lunch. Cofield also hopes to be able to take seven students from the program to New York City in spring 2018.