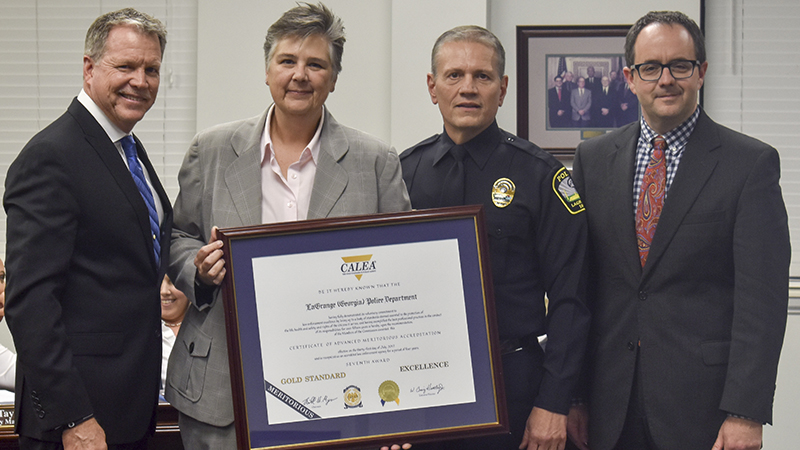 In August, the LaGrange Police Department received accreditation through the Commission on Accreditation for Law Enforcement Agencies (CALEA) for the seventh year in a row.

On Tuesday night, at the LaGrange City Council recognized the LPD for that achievement.

“The certificate itself is simply matted paper in a frame but it has much broader, symbolic meaning,” Connelly said. “The certificate clearly represents the agency’s efforts to achieve accredited status and therefore its willingness to change in order to effectively address temporary public safety concerns.”

Connelly said two assessors visited the LPD in April to review applicable files, activities, impacts and management strategies. The CALEA website lists several benchmarks for accreditation, including a uniform set of written directives, provide necessary reports and analyses to make fact-based, informed decisions and a means for developing and improving a relationship with the community, among other things.

Dekmar specifically recognized Accreditation Manager Sgt. Karen Sanders for the role she plays in the accreditation process each year.

“Everybody in the agency participates in accreditation but every team needs a quarterback, and Sgt. Sanders is our quarterback,” Dekmar said.

He also thanked the city council, the entire police department and the community for the role that they played.

“The police department got the recognition but the award belongs to all of us,” Dekmar said.

Landscape plan to be made for Eastside Park