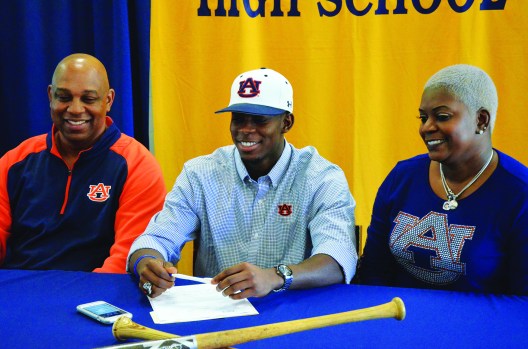 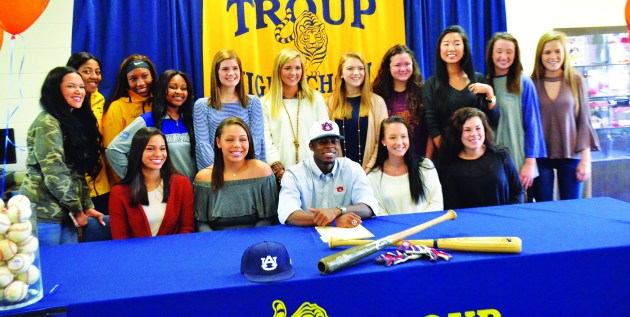 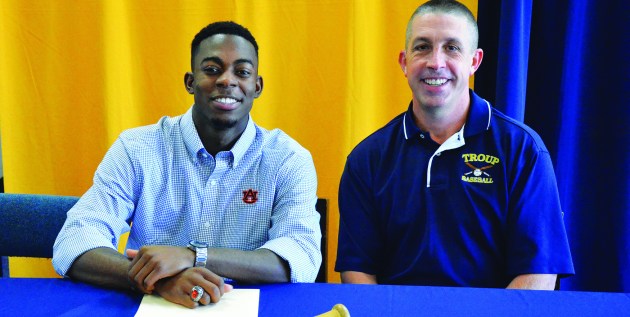 When Troup head coach Craig Garner looks at Ryan Bliss, he sees a lot more than a baseball player.

While Bliss is an exceptionally-gifted athlete, and he is one of the top shortstops in the state, Garner said he also the kind of person any parent would be proud to have as a role model for their children.

“I’ve got four boys now,” Garner said. “I’ve got a sophomore, an eighth-grader and a seventh-grader. And I’ve told those boys, do what that guy does. Stay in his hip pocket, follow him, act like him, get to know him, do what he does. I don’t think there’s any greater compliment than that.”

On Friday morning, Garner was on hand to help Bliss celebrate a special moment in his life.

Bliss, a senior, signed a letter of intent to play baseball at Auburn, and there were dozens of people there to support him, including his parents, Rhonda and Isiah.

Family members, friends, teammates, classmates, coaches at Troup and on his East Cobb travel team, faculty members and others piled into the media center at Troup to be there for Bliss.

Bliss even got a phone call from Auburn head coach Butch Thompson who wanted to offer his congratulations and well-wishes.

“A big War Eagle to everybody at Troup,” Thompson said.

Bliss will have one more baseball season at Troup before he embarks on his next journey as a member of the Auburn family.

“With coach Thompson and all those guys, I knew it was home,” Bliss said. “Sometimes you just feel things are right, and that was just right. It’s perfect. And Auburn’s gotten so much better. They almost made the College World Series last year. It’ll be fun.”

Bliss was a starter from day one at Troup, and he has been one of the state’s premier players for three years.

Garner has enjoyed having him as a player while watching him develop as a person.

“He walked into a program his freshman year that was pretty good,” Garner said. “And sure enough, he walked in and was a starter from day one. So that says it all about what he is as a player. But it still doesn’t touch on everything he is as a young man.”

After mentioning that Bliss has a 4.16 grade point average, Garner said “you’re never going to meet a teacher that doesn’t love him, that’s not going to say great things about him. You’ll never meet a player that’s going to have something negative to say about him.”

While excited about his future as an Auburn Tiger, Bliss is also looking forward to one final go-around as a Troup Tiger.

Bliss has been a part of three extremely successful teams, including two that won region championships.

The Tigers haven’t had a great deal of playoff success, though, and that’s something Bliss is hoping to change next spring.

It’ll be a talented team, with most of last year’s players returning.

“I’ve been on three good teams,” Bliss said. “We were back-to-back region champs. We just can’t seem to get over that hump in the playoffs. But something about this year makes me confident. We’re going to get after it.”

Bliss even took on a new role last year.

Bliss was exclusively a shortstop his first two seasons at Troup, but when a need arose at pitcher last spring, he was asked to give it a shot.

Bliss ended up becoming one of Troup’s best pitchers, and in the most important game of the season, he threw a two-hitter in a 6-1 victory over West Hall in the decisive third game of their state-playoff series.

“The last time I pitched before last year was when I was 12-years-old,” Bliss said. “Coach (Garner) came and asked me, and I told him I’ll pick up whatever I need to pick up just to help the team.”

Bliss also continued to dazzle from his shortstop position, and he hit .420 and drove in 30 runs.

Bliss said he appreciated everyone who came to Friday’s signing ceremony, and there weren’t many empty chairs in the media center.

Among those in attendance were his teammates on the baseball team, as well as a few of the football players who were preparing for their second-round playoff game.

Athletes from a number of other sports were represented as well, including softball player Maddie Weathers, who will have her own signing ceremony in a few weeks.

“I don’t know everybody (at Troup),” Bliss said. “But with this turnout, it shows how everybody is a family. I’ll turn around and come to Maddie Weathers’ signing so I can support her like she supported me. I love every single one of them.”