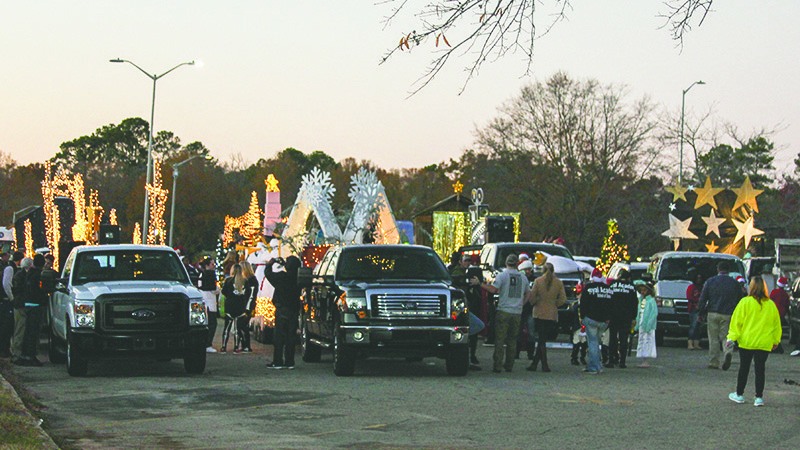 It’s beginning to look like the holidays throughout LaGrange as the community readies for the 41st annual Christmas parade, sponsored by the LaGrange-Troup County Chamber of Commerce.

The theme for this year’s parade, “Let There be Peace on Earth,” was inspired by the 1955 song that has become a signature composition devoted to world peace and harmony among peoples.

Applications for those wishing to participate in this year’s parade must be submitted to the Chamber office at 111 Bull Street no later than 3 p.m. Monday through Wednesday, Nov. 22. The entry fee for each parade unit is $40 and an unwrapped toy.

All participants contribute toys as part of the registration process.  “We partner with Toys for Tots to distribute the toys to children throughout Troup County,” noted LeTisha Smith, Director of Special Events for the Chamber. “The Chamber reminds everyone that the best gift this year is one that is given to someone in need.”

Bernard Bledsoe of the Charles F. Waller Marine Corps League Detachment 1040 indicates this is a great opportunity for parents.  He believes “if you are a parent or grandparent and want to teach a child about the true meaning of Christmas, let the child pick out a toy to give to someone else.  The best kind of giving is a gift to someone in need.”

The Chamber also reminds spectators that the parade will begin at Granger Park and head south on North Greenwood Street. Marching groups will be merged into the parade from St. Mark’s with the procession going down North Greenwood to Haralson Street. The parade will then turn right onto Church Street to the Square and Bull Street. The parade will turn left onto Broome Street before turning back onto Main. The procession will then follow Main Street, past the Square to Ridley Avenue.

Smith noted that “there are so many great places to view the parade throughout downtown.”  Viewing stands will be placed on the Square for those that arrive early.

“We’re so happy that the Downtown Development Authority of LaGrange asked Santa to arrive early to the Lafayette Plaza.  From 3 to 5 p.m. children can take pictures with Santa, Frosty the Snowman and Rudolph the Red-Nosed Reindeer, so arrive early!”

Mayor Jim Thornton will host the annual LaGrange tree lighting ceremony beginning at 5:15 pm on the Plaza. Parade Grand Marshals Carl Von Epps and Ricky Wolfe and their families will “flip the switch” to illuminate the downtown tree.

“The forecast is for perfect parade weather,” Smith said.  “However, bring a jacket — Santa is bringing cool temps from the North Pole with him.”

The parade will proceed rain or shine.

For more information, please contact the Chamber at (706) 884-8671 or letisha@lagrangechamber.com.