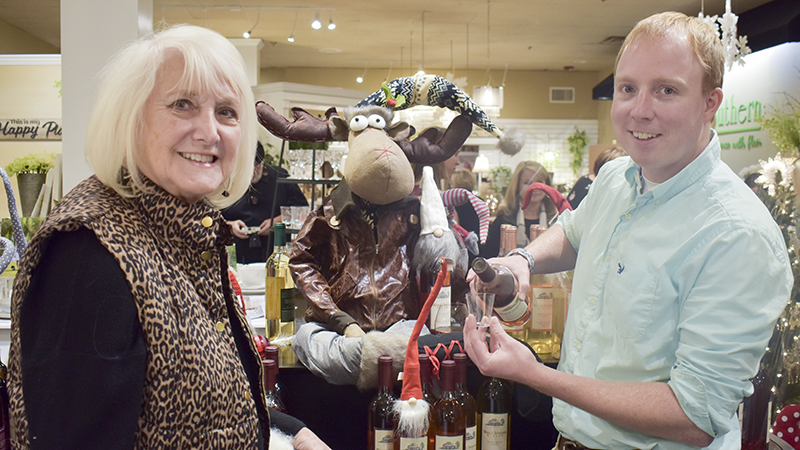 This weekend, Troup County residents sipped and shopped and had a great time in local stores during Sip and Shop events in downtown LaGrange and Hogansville.

Both cities saw an impressive number of shoppers looking to check a few items off their holiday shopping lists this weekend, while sharing a bit of holiday cheer.

“It is the merchants’ favorite event of the year,” said Barbie Watts, the Downtown LaGrange Development Authority’s director of promotions and marketing. “They love it because they decorate for Christmas and get excited for the holiday season and are happy to welcome people into downtown to do their Christmas shopping with them.”

On Friday night, customers crowded the shops in downtown LaGrange, enjoying the Christmas decorations, locally produced wine and time with friends. LaGrange’s Sip and Shop event has become an annual tradition for downtown merchants, who use it as a way to kick off the Christmas season.

“Seeing all my customers who shop with us throughout the year (is my favorite part),” said Al Brannon, the owner of Marketplace at Lafayette Square. “This is just a night to give back to them for the year, and we can say thank you and just have a good time.”

Hogansville also saw a great turnout to its Sip ‘N’ Shop on Saturday.

“It is really going well,” said Mary Stewart of William and Mary’s Antiques. “I think we’ve had more people than we’ve ever had. A lot of people are finding Hogansville and finding all of the great little shops, unique shops here.”

The Hogansville event featured live music outside Station Coffeehouse along with the grand opening of a new art show at the Suffering Artist. Almost every business in the little downtown was open for business.

“I think it has gone very well,” said Chris Swanson, the president of the Hogansville Regional Arts Association. “What we are trying to do is have synergy for all the stores.”

The Hogansville Sip ‘N’ Shop has only been in place for a relatively brief time, but local participation in the pre-Thanksgiving festivities has already become a date that local shop owners look forward to each year.

“This is our third year, I think, and it seems to be getting bigger every year,” Stewart said. “People are looking forward to it. It is always the Saturday before Thanksgiving, and everybody is just getting into the mood of shopping, so I think it is working well for us.”

One of the most noted differences between shopping at these local stores and bigger outlets was customer service and community involvement.

“The customer service that they receive when they shop in our shops downtown — most of the shops will do complementary gift wrapping for them — you are not going to get that service in the big stores,” Watts said. “That is just something special. I call it old school customer service, and it is still here in downtown LaGrange.”

While the sip and shop events are now past, there will still be plenty of opportunities for locals to come out and enjoy local shopping and local events in both downtowns, especially with updated holiday hours in many downtown LaGrange stores.

Meanwhile, Hogansville is gearing up for its biggest Christmas event yet, with this year’s Christmas event set to feature a Christmas bazaar, live music and a tree lighting on top of the annual parade. The event will take advantage of some of the momentum that Hogansville has built with the Market Days, which began this summer.

“We are going to have Market Day that will be open with music, and this is just a taste of what is coming Dec. 9,” Stewart said. “All the shops again will be open. We’ll have the parade at 6 o’clock, and there is going to be a bazaar from 11 a.m. of local products down in one of the buildings that is opening up for the bazaar.”

Between the bazaar and the parade, organizers expect the Christmas Market Day to be a full day of fun.

“We’ve got vendors coming from Newnan, Peachtree City,” Swanson said. “We are hoping to make it something that people from all over want to come to for just a good fun Christmas Market, and I think they will. I think that we are getting a good enough response that — I don’t think it will be as big as the Hummingbird Festival, don’t get me wrong — but I think that it will have a nice attendance, a nice turnout, and I hope they come from all over. “

The LaGrange Christmas Parade is scheduled to take place on Nov. 30 with pictures with Santa available on Lafayette Plaza from 3 to 5 p.m. and the tree lighting at 5:15 p.m.