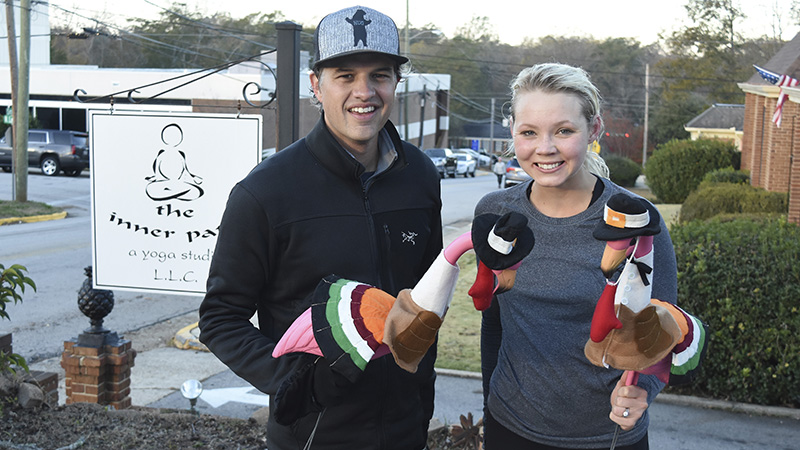 Jason Stewart and Betsy Demoss pose for a photo with the flamingos they got for winning Thursday’s Turkey Trot. --Daniel Evans

Hours before sitting down for their Thanksgiving meals, around 100 runners burned off a few calories during the 7th annual Inner Path Studio Turkey Trot.

The run started at 7 a.m. with the temperature in the high 30s, but the weather didn’t keep people away.

“We’ve got our layers on. It’s all a mindset,” said Dana Davis, who was running with her daughter Marissa Cannady, who was in from southern California.

Every year the trot gives back to a charitable organization, and this year it was the LaGrange-Troup County Humane Society.

More than $600 was raised and several bags of dog and cat food were also donated.

“It’s more about bringing the community together and fellowship and friendship than winning a race,” said organizer Lisa Alford, who also operates Inner Path, a yoga studio. “It’s Thanksgiving. It’s about being thankful.”

Jason Stewart finished first in the 5-mile with a time of just over 37 minutes, 14 seconds.

“I really enjoy running and there’s a couple of guys in town that I run with. The guy I finished up with, he’s one of the guys I run with and my wife is out here somewhere,” Stewart said. “It’s a good way to start the day.”

Betsy Demoss was the first female to finish in 41 minutes, 55 seconds. Stewart and Demoss got to take home flamingos, which are signed by the winners each year.

“My mom has done yoga at Inner Path since the studio opened, and I started [running this then],” Demoss said. “I live in Athens but come back to LaGrange every year for Thanksgiving. Usually our whole family runs it.”

Jackson Burns and Alyson Prior were the first two finishers in the 2-mile run. 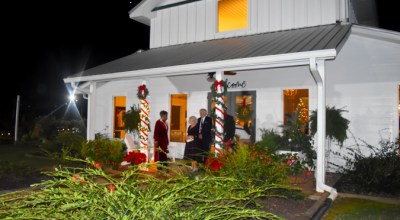