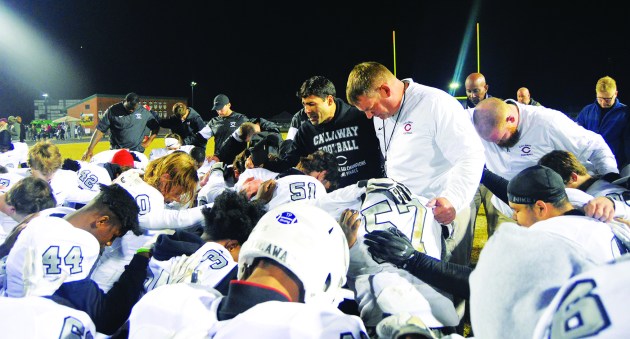 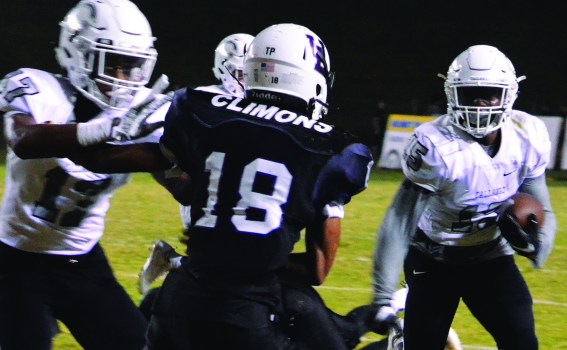 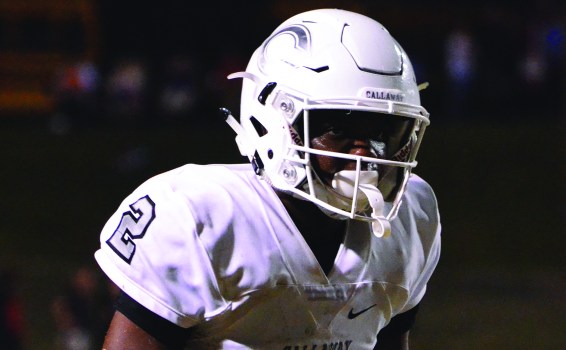 HOGANSVILLE – The Callaway football family will be again together on Thanksgiving.

In previous years when Callaway has still been playing football this time of year, the players, coaches, and family members have gotten together at the school for a Thanksgiving meal.

That will be the case again today as the Cavaliers get ready to head to Brooks County on Friday for a third-round game in the Class AA state playoffs.

Callaway has, in fact, stuck to the same routine it has followed during previous years when it has been playing during Thanksgiving week.

“We’ll watch film on Sunday, and practice each day at 3 p.m. and have a Thanksgiving meal on Thursday, and then we’ll go to Brooks County,” Callaway head coach Pete Wiggins said on Saturday, one day after his team beat Rockmart 40-35 in the second round of the state playoffs. “It’ll be a great test for us on the road, but our kids believe in what we do, and they believe in one another, and we’re excited for the opportunity that we have Friday night.”

BUSY CAVALIER: There aren’t many players on the Callaway football team that have just one job.

It’s a team filled with versatile players, with men who occupy multiple positions and have various roles on game night.

One of those players is senior DQ Wilkerson, who has been a standout at three positions this season.

Wilkerson is a part of a veteran and talented defensive backfield, and he is also a gifted wide receiver who has multiple scoring catches this season. Additionally, Wilkerson returns punts, and he scored a pair of touchdowns in that role against Columbus earlier this season.

Having players like Wilkerson who do so much is a big reason why the Cavaliers are 11-1 and in the Class AA quarterfinals for the second straight year.

“DQ is so valuable to our team,” Wiggins said. “He plays a lot of plays on offense, and he doesn’t come off the field on defense. And then he has all these plays on special teams.”

In last week’s 40-35 win over Rockmart in the second round of the state playoffs, Wilkerson caught a 15-yard touchdown pass from Kedrick Ramsey that gave Callaway a 34-21 lead.

That was Callaway’s last offensive touchdown, with Courtney Williams returning an interception for a score later in the game.

“DQ Wilkerson is such a solid kid,” Wiggins said. “I’m just proud of his leadership he has displayed each week.”

STEPPING UP: Among the leading tacklers for the Callaway Cavaliers last week were the usual suspects, including senior linebacker Jonathan Leonard, who had his typical big game with 17 tackles.

One player who isn’t usually among the leader tacklers came through with a big game as well.

Sophomore linebacker RJ Williams, who started getting significant playing time about a month ago, had eight tackles in Callaway’s win over Rockmart.

“As a sophomore, his playing time has really gone up the past four weeks,” Callaway defensive coordinator Dusty Hubbard said. “We felt like he had a really good game.”

Jonathan Leonard, Callaway’s leading tackler, was moved to sam linebacker late in the season, and Williams began getting more playing time at will linebacker.

Against Rockmart, Williams got even more playing time than expected because some other players were banged up.

FINDING THE END ZONE: Cartavious Bigsby and DJ Atkins have scored the bulk of Callaway’s rushing touchdowns this season, but it was Qua Hines leading the way in that category against Rockmart.

Hines had a season-high two touchdowns in the 40-35 win.

Hines had scoring runs of six yards and three yards in the second quarter to help Callaway take a 28-21 lead at the half.

Like so many Callaway players, Hines has been a versatile player this season.

Hines is a key player on defense from his linebacker position, and he’s part of one of the state’s best running-back trios along with Bigsby and Atkins.

Those three players have combined to run for more than 2,000 yards, and they have more than 3,000 combined all-purpose yards.

Hines also showed off his throwing arm when he threw a 66-yard touchdown pass to Jacob Freeman against Upson-Lee.

OFFENSIVE JUGGERNAUTS: The Cavaliers are averaging 37 points per game, and they were even better than that in last week’s 40-35 win over Rockmart.

Callaway has scored 35 or more points in six of its previous seven games, and four times during that span it has scored at least 40 points.

Brooks County averages 33 points per game and it has scored 39 and 35 points, respectively, in playoff wins over Vidalia and Dodge County.