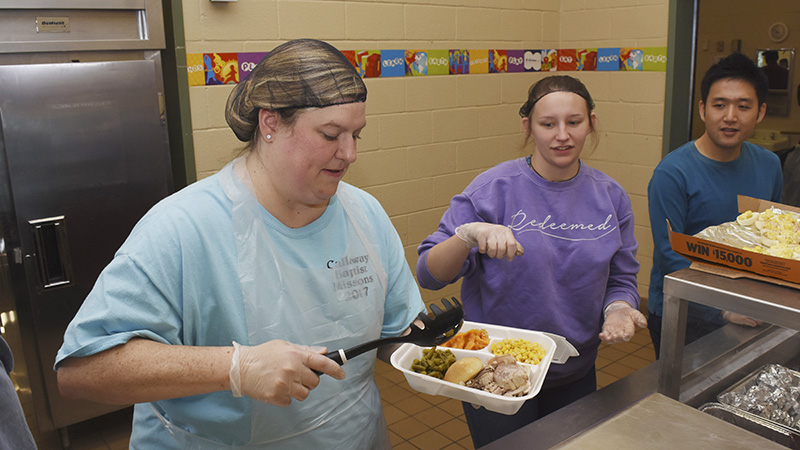 Above, Stepahnie Spradlin prepares a plate of food and hands it off to Shayla Fuller.

More than 60 volunteers spent part of their Thanksgiving cooking and delivering hundreds of plates of food for local people.

Thursday was the 23rd annual Up All Night Thanksgiving Dinner, and just like every previous year, it’s completely dependent on volunteers. More than 700 plates were made in all and most were taken straight to people’s homes, so that they too could enjoy a great meal without leaving the house.

Edwards said the goal was to make 500 plates, but that number was easily surpassed. The community provided 35 turkeys, which were all cooked and prepared. By Thursday at 10:30 a.m., the turkey was running low but there was still plenty of dressing, sides and rolls.

At that point, volunteers started making vegetable plates. As the time got closer to 11 a.m., people were still walking in and asking for a plate.

“We have some [volunteers] that are here for the first time, and it’s wonderful,” Edwards said.

He said they started cooking the meal on Monday and had most of it done by Wednesday evening.

“I’m just overwhelmed that this has gone successful,” Edwards said. “There’s a lot of people who help put this together.”

A group of volunteers from Callaway Baptist Church helped out for the first time this year. They were dipping the plates so that other volunteers could deliver them.

“I really want to be involved in my community. Coming out and doing this before I go be with my family seemed like a no brainer,” said Shayla Fuller, who spent several hours helping out Thursday.  Fuller said the group from Callaway Baptist Church got there before 7:30 a.m. Thursday and started wrapping desserts.

“You feel really grateful that you are able to come out and serve people,” Fuller said. “Then you kind of get sad because we do have the opportunity to go home and spend Thanksgiving with our family. There’s other people in our community that don’t have that option.”