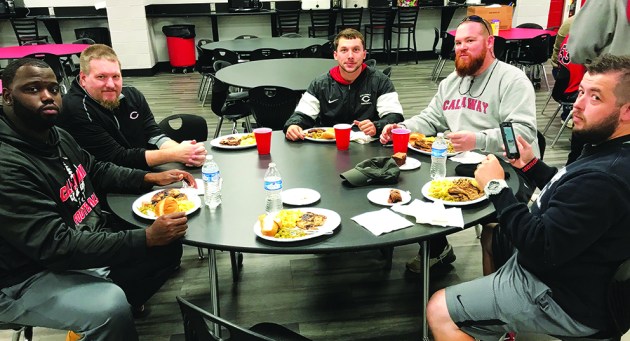 HOGANSVILLE – Twenty years ago, Pete Wiggins was an assistant coach at Highland Home in Alabama.

It was Thanksgiving week, and the team was preparing for a state-playoff game.

On Thursday of that week, on the eve of the state-playoff game, the team practiced in the morning before getting together for a Thanksgiving meal, with family members of the players and coaches joining in the festivities.

It was an occasion Wiggins enjoyed and thought was beneficial for the team, and he remembered that day when he became the head coach at Callaway High in 2005.

As long as he has been at Callaway, when the team has still been playing this time of year, the players have been treated to a meal on Thanksgiving.

That was the case again on Thursday, with the Cavaliers getting on the field for a practice at 9 a.m. before heading to the cafeteria for a Thanksgiving feast.

“I’m very thankful for all of those that contributed to making that happen,” Wiggins said. “My dad (Mike) got here this morning at 5:45. He and I have been doing this a long time. I don’t know how many Thanksgiving dinners we’ve done, but it started back in 1997 with coach (Claude) Giddens at Highland Home. It’s been really special for us, and it was really good today. A lot of parents were there helping to serve, and a lot of Callaway mommas and daddies brought food in. It was just a really special morning.”

The Cavaliers are hoping to make some more special memories today when they head to Quitman to play the Brooks County Trojans in the quarterfinals of the Class AA state playoffs.

It’s a rematch of a second-round playoff game from a year ago that Callaway won 28-14.

Callaway (11-1), which finished second in Region 5-AA, has beaten Douglass-Atlanta and Rockmart in the first two rounds of the playoffs.

Last week, Callaway beat Rockmart 40-35 to reach the quarterfinals for the fourth time since 2009.

If the Cavaliers win today, they would reach the semifinals for the third time since 2013, and for the second consecutive year.

Standing in the way is a talented Brooks County team that knocked off unbeaten Dodge County 35-17 to advance.

Brooks County (11-1) beat Vidalia 39-7 in the first round of the playoffs before running past Dodge County.

“Their defense is one of the fastest I’ve ever seen,” Wiggins said. “They run to the ball, they play physical. Coach (Maurice) Freeman has got a great tradition there, and the kids play hard. So it’ll be a big opponent for us. But our kids believe in what we do, and when we go on the field we believe we’re going to win. We had a good week of practice in preparation, so we’re excited about the opportunity to go down to Brooks County.”

That the Cavaliers would be in this position for a second straight season was hardly a given.

When the Cavaliers made their run to the Class AA semifinals a year ago, they were led by a small but important group of seniors.

There were fewer than 10 seniors, but they were so critical to the team’s success.

Quarterback Dylan Johnson, wide receiver Braylon Sanders, defensive lineman Keegan Woods,  and linebacker Michael Freeman were among the seniors who helped the Cavs go 13-1 and make it to the semifinals for the second time in four years.

It was Johnson who led Callaway on a 98-yard touchdown drive in the closing moments of the remarkable 35-34 victory over Screven County in the quarterfinals.

That scoring drive was capped by a 47-yard touchdown pass from Johnson to Sanders on fourth down.

Yet despite the loss of those gifted seniors, most of whom are playing college football, the Cavaliers are once again among the last teams standing in Class AA.

“I think getting better each week is a big part of being successful long-term, and seeing kids grow and understand their roles and step up in leadership roles,” Wiggins said.

One of those players who has grown into his role is Kedrick Ramsey, who replaced Johnson as Callaway’s quarterback.

Ramsey has capably held down that position since the season-opening win over LaGrange.

In the win over Rockmart, Ramsey completed 6-of-8 passes for 104 yards with two touchdowns.

“He’s gotten so much better since Day 1,” Wiggins said. “He leads our team, and he’s done a great job, and I’m really proud of him.”

Wiggins said there are numerous other players that have made massive strides since day one until now.

“There are lots of kids on our team that have gotten so much better,” Wiggins said. “They just have a great understanding of what we’re trying to do, and they work hard every day. We have a lot of good chemistry on our team. And the kids expect to win when we get on the field. And there’s just a great attitude at practice, and I feel like that’s what’s made us better each week.”

A strength of Callaway’s team is an offense that has been scoring nearly 40 points per game.

Ramsey has done his part with some big plays in the passing game, and Courtney Williams, DQ Wilkerson and Jacob Freeman have been his favorite targets.

Wilkerson and Freeman had scoring catches against Rockmart.

Combined, those three men have run for more than 2,500 yards, and Atkins went over 1,000 yards by running for 108 yards on 18 carries against Rockmart.

Hines had two touchdown runs against Rockmart, while Bigsby had one scoring run.

Paving the way is an offensive line that has been opening big holes all season.

Callaway’s defense has been up to the challenge as well.

The Cavaliers allow 15 points per game, and they’ve held five of their opponents to eight or fewer points.

Rockmart’s offense was able to find some success last week, but Callaway’s defense made a play when it had to.

In the final minutes, Courtney Williams returned an interception nearly 100 yards for the game-clinching touchdown.

Callaway has an opportunistic defense, with defensive back Kobe Jackson, and linebackers Tely Fanning and Jonathan Leonard having also scored defensive touchdowns.

Leonard, who has more than 100 tackles for the second straight season, had 17 tackles against Rockmart, and senior defensive lineman Lichon Terrell helped control things up front.

On special teams, senior Noah Stephens has been consistent on extra points, and he has also done a terrific job at punter.

Wilkerson returned a pair of punts for touchdowns in a game against Columbus, so he has the potential to be a game-changer tonight.

Brooks County’s high-powered offense is led by quarterback Mac Perry, who has thrown for 1,150 yards with 10 touchdowns. Perry also has 319 rushing yards with a pair of touchdowns.

Running back Jonathan White has more than 1,000 yards this season, and he had four rushing touchdowns against Dodge County.

REMATCH: Callaway beat Brooks County 28-14 in the second round of the playoffs last season