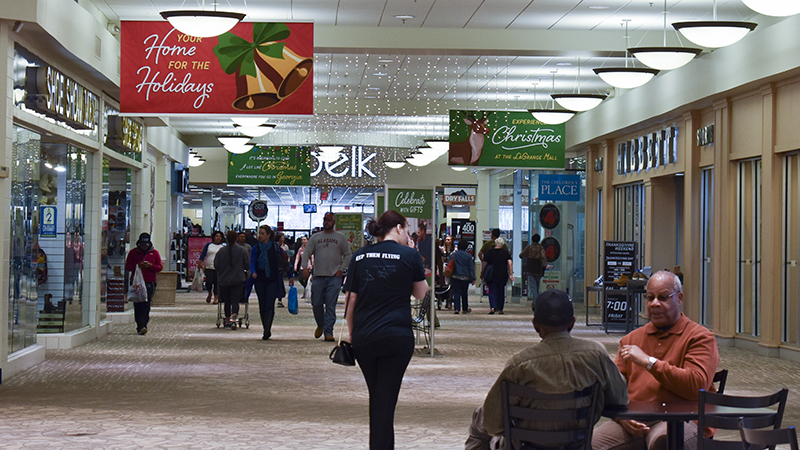 The LaGrange Mall was busy during Black Friday as shoppers tried to get some of the best deals of the year.--Alicia B. Hill

“A lot of people shopped on Thanksgiving night, like more than last year, more than the year before, a ton of people, so that was good,” said Bonnie West, manager at The Sock Shoppe.

“It was a slow start, but it has definitely picked up in the afternoon,” said Elizabeth Saturday, store manager at Dry Falls Outfitters. “When they do the Thanksgiving thing, it tends to not bring them out first thing in the morning.”

As of Friday afternoon, many shoppers were still arriving at stores looking for holiday deals.

“We found some stuff 15 and 20 percent off,” said Todd Bohn, a holiday shopper who said he shopping at Dunham’s, The Sock Shoppe and Stephen’s Exclusives. “It was great.”

The atmosphere in stores was also notably jollier then some locations have seen in the past.

“I think Black Friday can have a negative connotation because you think it is going to be crazy and busy and crowded and people are going to be snatching stuff, but it hasn’t been like that at all this year.

People have been super nice, and nothing like the Black Friday scary stories.”

Customers were glad to see the relatively calm, though still busy mall on Friday.

“It wasn’t as hectic as its been in the past,” said Lynn Owens, a holiday shopper. “It was nice.”

“It went great,” said Teresa Copeland, another shopper. “We found a lot of deals, but we are just getting started.”