West Point comes together for Thanksgiving 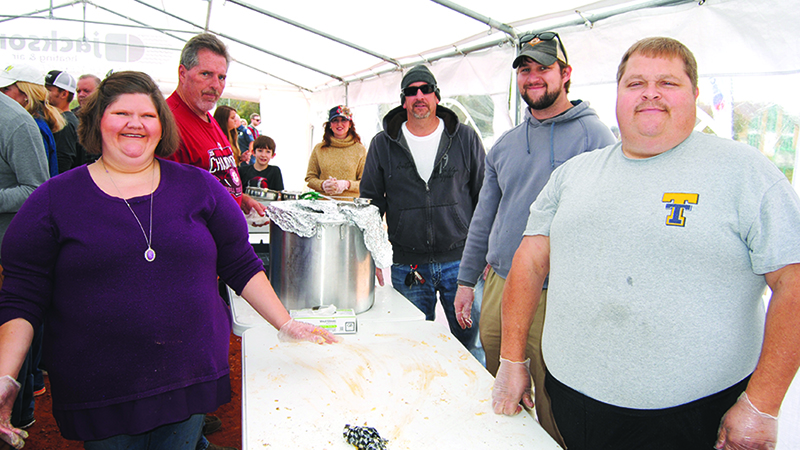 WEST POINT — The corner of East 10th Street and Martin Luther King Jr. Drive was a very busy place during the noon hour on Thursday.

More than 100 people were on the site preparing and delivering more than 800 dinners to West Point residents. The big group  of volunteers included the mayor and members of the West Point City Council, a five-member shift from the West Point Fire Department, members of Refuge Point Church, downtown restaurant owners and a large number of townspeople who wanted to take part in a good cause.

Tramell wanted to to this on his own as a way of thanking the city for electing him mayor earlier this month and was thinking about distributing around 200 plates. His wife, Margaret, discouraged him from taking on something like that on his own, especially after a grueling campaign.

The newly-elected mayor then thought of seeking out some assistance.

“On a Sunday afternoon I approached two downtown restaurants about the idea of a Thanksgiving dinner program as a way of giving back to the city,” he said. “They liked the idea, and the word went around about it. By noon on Monday, every restaurant in the downtown area had joined in, along withe Chattabrewchee, the Chattahoochee Fuller Center Project and the West Point Fire Department.”

“We’d love to be able to do this every year,” Tramell said. “What I like best about it is the way people showed up this morning wanting to help in some way. We must have had at least 80 people wanting to help us. It’s amazing to have that many people come out on a holiday, wanting to help their fellow man.”

Early Thursday morning, the food was brought to an all-weather tent that was on loan from Jackson Heating & Air in LaGrange.

The food was heated and then boxed for delivery to West Point residents, with the highest priority going to serving the homebound and the elderly.

The delivery crew had some really touching stories to tell. “One elderly woman in the public housing area told us she wasn’t expecting anything for Thanksgiving,” said Council Member Sandra Thornton.

“She told us no one else had thought of her.”

And how much food goes into preparing 800 Thanksgiving dinners? The five restaurants that cooked the food all-day Wednesday, jointly prepared 84 turkey breasts, 52 pans with all the fixins, 12 gallons of gravy and 60 cans of green beans.

“This was more successful than we’d hoped for,” Tramell said. “It was a huge, cooperative effort, and so many people helped out. Refuge Point Church helped  out in a big way, as did the fire department. We delivered all the plates today.”

Some north-bound travelers on I-85 will remember West Point as a place with some special Southern hospitality. Some of the Thanksgiving Day plates were taken there to be given to  travelers who stopped by.

Tramell said he wanted to thank Jackson Heating & Air for providing the tent. If it has a Jackson connection you can rest assured that it’s both  heated in cold weather and kept cool when it’s hot. The tent made for an ideal location for the volunteers to prepare some 800 plates for delivery.

That tent is gong to be staying in the local area for a while. From the corner of Eat 10th and MLK in West Point, it will be going across the river into Valley for this year’s Christmas Merry Go Round on the Langdale tennis courts.