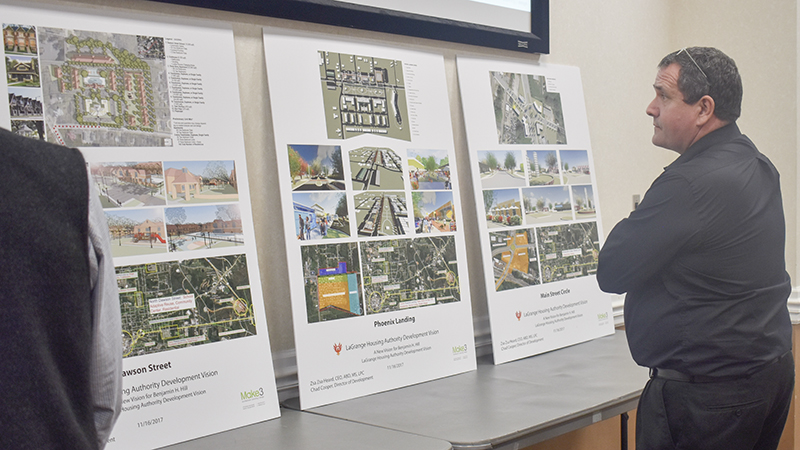 The LAH meeting last week is the first of several that will discuss the phases of the LaGrange Housing Authority’s vision for its properties and several others. Highlights of the plan include modern housing for low-income families and seniors, a park alongside Whitesville Road and retail opportunities along one of LaGrange’s most traveled roads. Those involved in the plan hope that these improvements will serve to create a safer, stronger community for the residents of that area and LaGrange as a whole

“We should be removing blight, the housing authority,” said Zsa Zsa Heard, chief executive officer for the LaGrange Housing Authority. “We should be considered the main developer in our city because we are the housing authority, but we definitely want to form that partnership with the city to work together. The city doesn’t do development or housing, but I want them to look to us for the housing, to be able to put the affordable housing that we need to meet the needs of our entire community.”

One of the most visible parts of the plan will be the changes that are planned for the Ben Hill area, which the housing authority hopes to rebrand as Phoenix Landing. The plan for that area includes a complete rebuild of the housing to account for modern families. The residents will receive vouchers through the housing authority so that they can afford to move to another location during the construction process and will be allowed to move back to the revitalized area afterwards. When they return though, the planners say that the area may be practically unrecognizable.

“It is a real opportunity to develop a village along the path to downtown LaGrange,” said Jim Winer of Make 3 Architecture, who is over the project. “The Housing Authority plans to redevelop this site, and they also own this wooded property adjacent to it and plan to turn that into senior housing.”

A park along Whitesville Road is also part of the plan, and the housing authority is working to find funding for that portion. The City of LaGrange and the Callaway Foundation have both committed partial funding to the park project, and a grant request for the remaining funding was submitted earlier this year.

“A few years ago, they looked at developing a linear park along Whitesville Road, and then the reimagined housing will be behind that linear park,” Winer said. “So, what we’ve done is looked at redeveloping this entire parcel and looking at opportunities across the street, so if you imagine this as a village on your way to downtown LaGrange, then it would have all the amenities of a village: the housing, a community center, the retail, as well as an improved streetscape.”

Board members of the LaGrange Housing Authority are aware of their location in relationship to the Great Wolf resort that will be opening just two miles away from Ben Hill, and presenters made note of the role of Whitesville Road as the corridor that visitors will pass through to travel from the resort to downtown LaGrange. This travel path has been noted by the City of LaGrange, which also hopes to see the area improved.

“In the Gateway Corridor Plan, which the city council adopted unanimously, that Whitesville corridor was the top priority as part of the Gateway Corridor Plan,” Mayor Jim Thornton said. “The city has done minor things such as replacing the lighting on Whitesville Road with LED lighting and doing some sidewalk repair, but the overall idea of doing a major gateway improvement is very much on the city’s agenda.”

The City of LaGrange earmarked $2 million of the recently approved SPLOST for gateway and corridor improvement projects like the one planned for Whiteville Road. However, even with city support and a plan of action, the project is expected to take at least four years and will likely start in the Lucy Morgan Homes.

“I know in a lot of the other communities, it has taken a lot of time and a lot of effort and a lot of partnerships with other developments and with other groups in order to bring this together,” said Joseph Alford, vice chairman for the Housing Authority Board of Commissioners. “So, what we’ve seen, and what we have here in LaGrange is something that we are going to try. We are bringing it all together, so you all can see what we are doing and help us shape LaGrange.”

Those who are part of the plan believe that the time and effort will be worth it though, if the community wants to see the area become a thriving part of town in the future.

“It’s been 60 something years, and it does not work, the model that we have,” Heard said. “We’ve got to create a different model.”

Officials from both city and county governments, as well as other groups invested in local development, attended the meeting, and the ideas presented were generally met with cautious optimism.

“This is the type of project that really offers some great opportunities for us to continue our momentum as far as building bridges in connection with our community members and different members of our community,” LaGrange-Troup County Chamber Executive Committee Chair John Asbell said. “If you think about that circle and the facilities that they are looking to develop, it is going to offer opportunity for us to get closer together and come together.”