LSPA to host The Nutcracker 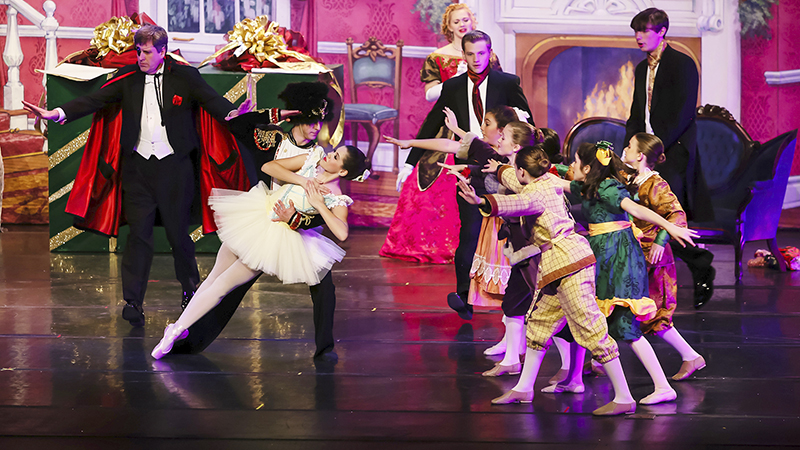 This weekend, sugar plums, snowflakes and sheep will dance straight out of Christmas dreams and onto the stage when the Lafayette Society for Performing Arts presents The Nutcracker at the Troup High School Fine Arts Auditorium.

The ballet begins at an old-fashioned Christmas party, and follows a young girl named Clara on her adventure through a land of ice and Christmas magic that begins after the party ends. The production features one of the most iconic scores of all-time and has become a community favorite over the years.

The Nutcracker is considered the most important ballet performance of the year for LSPA. The ballet has been performed by the company for roughly 30 years, and many of the dancers that will perform this weekend have grown with the ballet over the years.

“(My favorite part) is probably seeing the evolution of the children from when we start in September to when they perform for an audience this weekend,” said Amy Orr, director for the Lafayette Ballet Company and Lafayette Center for Dance. “In dance, training is thought of in years — never months and never weeks — but they do evolve and mature, not only in their dancing, but just in the way they carry themselves, their confidence, their time management. The kids are taking exams this week, they are here at the theatre, so it is really nice to see that evolution of their maturity and them growing up.”

Those years of growth as a dancer are felt by both the adults who organize and direct as well as the young performers.

“I definitely feel like I’ve grown,” said Jo Shoger, a senior performer. “The more I’ve danced and the older I’ve gotten, the more intense it has gotten, but the better I’ve gotten. I feel like I’ve really challenged myself and gotten better from it.”

This year will be Shoger’s sixth year taking part in The Nutcracker, and she will be part of the Snow Corps, Waltz of the Flowers Corps and the Spanish Hot Chocolate dances in this year’s ballet. For her, the very act of taking part in the ballet is what makes all the months of practice worthwhile.

“It is hard to say a favorite part because I love so much of it,” Shoger said. “The people, the performance, the dances, just putting all that time into it. It really pays off.”

For others, ballet’s ability to tell a story without uttering a word is the most compelling part of the annual performance.

“I really like the acts and the way that it is telling a story with dancing and without words,” said Anatullah Fidahussein who will be an angel in this year’s production.

Fidahussein has been dancing with LSPA for three years, and despite being a relatively young dancer, she already has her eyes set on some of the most beloved and best known parts in the ballet.

“When I get older, I would probably like to be the Sugar Plum (Fairy),” Fidahussein said. “As well, I want to be Clara in my next year.”

The ballet sticks to tradition in most areas, but minor changes have taken place over the years including updated costumes and rotating casts for the different performances in order to allow more dancers to perform.

“We have double casting with a lot of the performances, so you’ll see totally different children in one cast than another,” Orr said. “It is not just dancers getting different things to do on different nights, but a lot more kids that are able to have the opportunity.”

This year, the company will premier new French military inspired uniforms for the toy soldiers in the battle scene inspired by the Marquis de Lafayette. The Arabian dancers will also perform in new costumes this year. Other costumes like the sheep, whose performers often steal the spotlight and a few laughs, will make a reappearance this year.

“(My favorite part) is when the little cute sheep come out, so the part that I am doing,” said Londyn Fryer who will be a sheep in this year’s production.

The two male guest performers from previous years also plan to perform with the company this year, and as always, Orr hopes to see many of the alumni that she has worked with in her 21 years with the company at the performance.

“It just heralds the holidays,” Orr said. “It makes you very excited for Christmas and that spirit.”