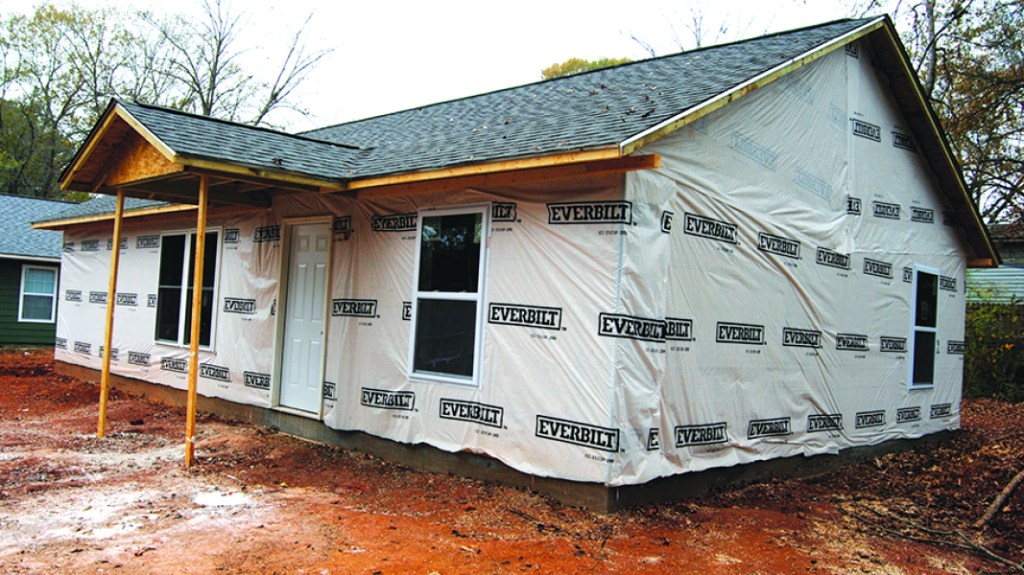 The CFCP is building a new home in West Point.

WEST POINT — At 8 a.m. this coming Monday, volunteers from EAMC-Lanier Hospital will get started on the second phase of a project that will make the 2017 Christmas season really special for a West Point woman and her three school-age girls.

Ruthshun Hall and her children will soon be moving into CFCP Home No. 38. The first phase of the project took place in early November. In a week-long project, EAMC-Lanier employees built the main structure of the house.

Next week they will be putting on the exterior siding and trim, doing the cornice work and finishing up the front porch. On the inside, they will be installing the cabinets, the floor covering and will be doing some interior painting.

The EAMC-Lanier crew is doing this for one of their own. Hall works in the hospital’s cafeteria. She and her girls will be taken out of less-than-ideal living circumstances into a new home that’s affordable. Hall will be making monthly mortgage payments at a level she can afford on her salary.

“It’s my Christmas present,” Hall said of the new home. “I’ve always wanted to have a house that would one day be mine. It’s such a blessing to be able to own a home.”

The CFCP’s executive director, Kim Roberts, says it’s the goal of the CFCP and the Fuller Center for Housing to give deserving people like the Halls a chance at home ownership. “This is an opportunity for Ruthshun to be a homeowner,” she said. “It’s something she might not otherwise be able to do.”

The new home is the 38th one that’s been built by the CFCP since 2007. It’s right next door to No. 37, which went up this past June. Ironically, that one was a Christmas house, too. During the 2016 Christmas season, seven-year-old K’Hairi Ross told his mother that he wanted them to have better living arrangements by the next Christmas.  That Christmas wish came true on June 24 thanks to the CFCP, its sponsors and volunteers. The new home for K’Hairi and mom Carla Ross, a U.S. Army veteran, is painted in a very Christmassy-looking green.

West Point Mayor Steve Tramell will be the house captain for next week’s finishing work. Around 20 EAMC-Lanier employees will be doing the needed work in shifts.

Tramell said he feels blessed to take part in CFCP projects and appreciates the way the organization is transforming West Point, Lanett and Valley little by little, block by block.

“We are not going to grow if we are full of decrepit housing,” he said. “Bringing in these nice, new homes is a boon for us.”

Roberts said that Tramell not only has done great work in leading the construction, he’s also been invaluable in finding land where houses can be built.

While watching the house go up several weeks ago, Hall said it was surreal.

“It still hasn’t set in that I’m actually going to have my own home,” she  said. “I just thank the Fuller Center from the bottom of my heart.  Me and my girls are so thankful.”

Once the Halls are in their new home, the CFCP will set its sights on building Home No. 39. That’s scheduled to be taking place in February 2018 in Valley.