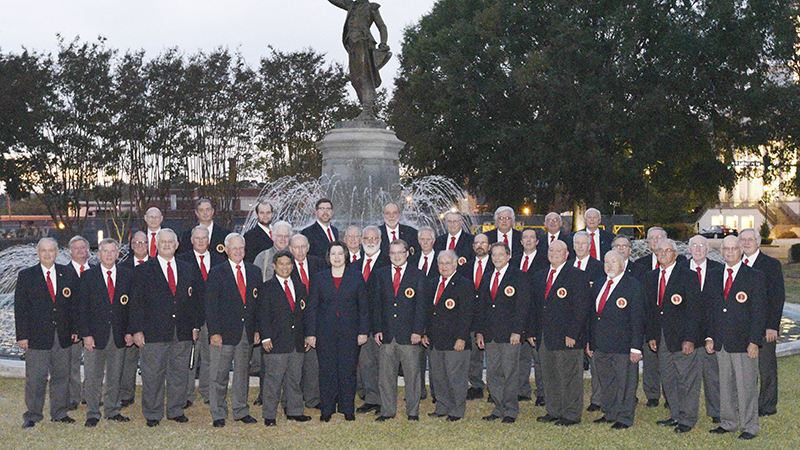 The Sons of Lafayette choir poses for a photo in downtown LaGrange. --Contributed Photo

The Sons of Lafayette Male Voice Choir is preparing for its annual Christmas performance, one of the choir’s biggest shows of the year.

The show, titled “Christmas with the Sons” will be held Dec. 9-10 at First Presbyterian Church in LaGrange and will feature an array of different songs. The choir is made up 33 men from the West Georgia and East Alabama area.

Cain said he believes this is the 16th year of the Christmas concert. He said the array of songs will be relatable to people of all ages.

“From Bach to the Beach Boys and all kinds of stuff inbetween,” Cain said. “It covers a whole bunch of stuff. I think almost anyone would find enjoyable parts of this.”

Maryann Kyle, a guest soprano soloist, will also be performing with the group during its Christmas show. Kyle is a professor of voice at the University of Southern Mississippi.

Cain said Kyle might be the first female soloist — other than director Beth Everett — to perform with the group.

“She was interested in having an experience with a male group and she is very, very qualified,” Cain said. “Her resume read like a dream, and we were fortunate to get her. She is extremely talented.”

“This will be all new music this year. We aren’t repeating anything from last year so anything you hear will be different from last year,” Everett said.

She said several songs deal with peace on Earth and said the audience will be asked to sing along three times throughout the concert.

“I think it’s going to entertain. It’s going to inspire people. We’re still early in the Christmas season and it’ll really help people get in the true spirit of Christmas,” Everett said.

The group performs regularly and has made appearances at the Biltmore Estate Christmas Tour in Asheville, North Carolina and at the Cornwall International Male Choral Festival in England over the last handful of years.

Tickets can be purchased by going to www.sonsoflafayette.org or by visiting Plum Southern or Market Place at Lafayette Square.  Tickets are $15 apiece. The shows are Dec. 9 at 7 p.m. and Dec. 10 at 3 p.m.