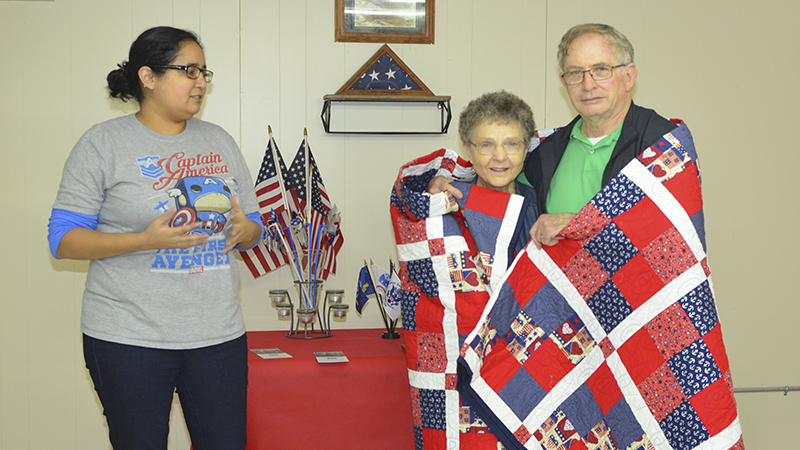 WEST POINT – The men and women in the U.S. Armed Forces risk everything for our country during their time in service, and now a group of local quilters is working to show their appreciation.

On Saturday, Donald Heine, a retired U.S. Naval officer who served from 1967 to 1970 received a quilt from the Quilts of Valor program that was created by local quilters to honor his service. The quilt was the second quilt created by the recently formed local branch of Quilts for Valor, and according to its members, hopefully one of many.

“This particular group just started,” said Jessica Ramirez, a leader for the local chapter of Quilts of Valor. “We cover Troup and [Chambers] County, and we just started this year. We started officially in November. Our first quilt awarded was Oct. 28 to a resident here in LaGrange.”

“Quilts of Valor was founded in 2003 by Catherine Roberts,” said Shelia Simpson of SewingMachine.com in West Point. “It is a national foundation, and we make quilts for our veterans. They have to be honorably discharged, of course, but they can still be in service.”

Donald Heine was chosen as the recipient of the quilt that the group awarded on Dec. 2 because his connection to the group through his wife and his service in the military.

“He was very touched,” said Judy Heine, who is a member of the group and Donald Heine’s wife. “He knew I was making a quilt, but he did not know that he was the veteran for the month of December, so it was a surprise when he received it last Saturday.”

For the roughly ten members of the local group, making the quilts for veterans is immensely rewarding, and they hope that more local quilters will be able to join in future projects.

“When we recognize their service, we (are showing we) appreciate it, and it is a very small way that we can say thank you,” Ramirez said.

The local branch of Quilts of Valor meets on the first Saturday of every month at SewingMachine.com at 807 3rd Avenue in West Point from 9 a.m. to 1 p.m. For more information about Quilts of Valor, visit Qovf.org.