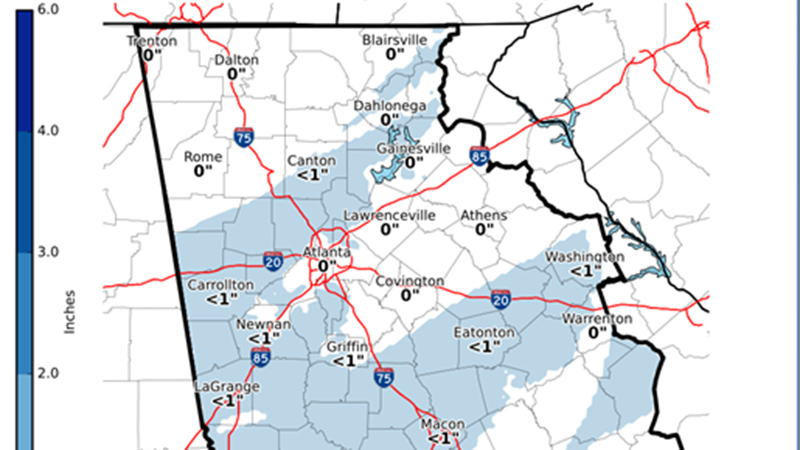 There’s a chance that parts of LaGrange and Troup County will see snow on Friday.

A winter storm will move into the area with a mix of rain and snow possible as early as midnight Friday.

“At any point throughout the day [Friday], you could see that back and forth between rain and snow,” said Adam Baker, a meteorologist with the National Weather Service in Peachtree City. “We’re more certain about the colder temperatures tomorrow night, so no matter what precipitation that you get, if there’s any residual moisture on the roadways, you’re likely to have some patchy black ice for Saturday morning.”

Baker said snowfall is likely to be from ½ inch to 1-inch for the entire day Friday, but said there is a lot of uncertainty in the forecast. He said there is moisture in place from the southwest and northeast that is covering the majority of the state, and high pressure and colder air that is filtering in.

“The interaction of the northern edge of this moisture and the colder temperatures is going to be where we are likely to see a rain to snow transition,” Baker said. “The interesting aspect of this is that what we believe is going to start around midnight [Friday] around the I-85 corridor there could be that transition to snow, however the surface temperatures should still be above freezing,” Baker said. “We think people are going to see some flakes falling down, but accumulations are more likely on anything that is grassy or elevated. If there’s a period of some heavier snow, there’s a chance it could turn into some slush on some of the roadways, but we don’t think it would last very long.”

“The black ice is something we want people to know for Saturday morning. Also, we just can’t rule out whether there is going to be road impacts. There could be brief periods of some slush on the roadways at any point Friday,” Baker said.

Yolanda Stephen, Director of Public Relations for the Troup County School System, said the school system is monitoring the weather, but as of press time there were no closures or delays.

The warming center located at 150 East Lukken Industrial Drive in LaGrange opens when the temperature reaches 37 degrees. According to the current weather forecast, it is likely to be open through at least Tuesday morning.  The center opens at 5 p.m. and remains open until 7 a.m. the following day. Volunteers are needed, but the center has plenty of supplies, according to warming center operations coordinator Mike Wilson.