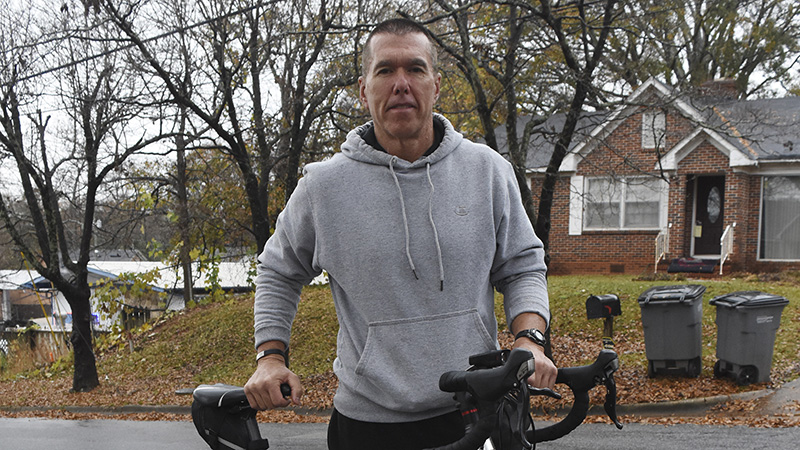 According to the Federal Highway Administration, the average driver in the United States logs 13,476 miles in their vehicle each year. By that standard, Ronnie Sivell is fairly average as well, considering he’s already completed more than 12,000 miles this year.

The only difference is Sivell is doing it on a bicycle.

“But I’ve done the math, and I have to average 27 miles a day the end of the year, and I’ll probably get it.”

Sivell is very driven, which helps explain how he’s doubled what most aggressive recreational cyclists get in a year. Before cycling, he loved golf and running. He first played golf in 1995 and within three months he was playing six or seven days a week and did so for the next decade.

“That’s just the way I am. I run things into the ground,” he said with a laugh.

Golf was the toughest sport he’s ever played. Like many others, he found it frustrating because he couldn’t find consistency on the course.  He also tried running, but that was tough on his body.

“Golf was so frustrating, and I’d play decent for my standards. I’d say I’ve got it figured out, and I’d go back and I’d try the same thing, and it wouldn’t work, so [cycling] sort of took the place of golf. It’s a lot easier,” Sivell said. “I’ve never seen anything as hard as golf.”

Several of his friends eventually talked Sivell into biking. He started with a 12-mile ride and he felt so good that he told everybody he knew about it.

“I went to work and told everybody, and actually riding 12 miles on a bike is not that big of a deal. It probably equates to running three or four miles,” he said.

At that point, he was hooked. Sivell started riding consistently and eventually talked his wife Kathy into a riding with him as well.

Last year, he rode for 10,000 miles, and he didn’t plan on pushing himself further this year. However, good weather in January allowed him to get off to a frantic pace, and he adjusted his goal to the year for 12,000.

“During the time I was trying to get the mileage, I was riding every day,” Sivell said. “Honestly, no joke, if I hadn’t gotten there right now I’d be riding today. This time last year I was trying to do 10,000 and didn’t get it until Dec. 17.”

Sivell reached that goal much earlier this year. Now, he’s aiming for 13,000 miles, and he wants to stay in front of some of the other guys he competes with.

He uses the STRAVA app to keep up with mileage and knows he’s got a small lead over a friend that lives in Stone Mountain.

“Don’t think I’m not thinking about that. Last time I checked I was 430 miles ahead of him, and I’m going to stay ahead of him too,” Sivell said. “He’s going to have to ride some days like this to catch up to me. I don’t think he knows I’m trying to beat him. It’s just a little competition in my mind.”

He’s a teacher at Callaway High School, but Sivell said at some point in the next few years, he’ll strongly conisder retirement.

He turned 55 earlier this week and might’ve celebrated on a bicycle, if the weather hadn’t been so cold.

When he does retire, he said he’ll probably spend even more time on his bicycle.

But he always wants to keep it fun. He admitted that at times this year, it felt like a job to keep pace with his goal.

“I have not been off without a bicycle in years,” he said. “On vacation, I take my bike with me everywhere. Every training seminar I’ve been to with school I’ve taken my bike and ride.”

“My bucket list thing is to ride across the country,” he said. “I’d like to do east to west and north to south, just not in the same year. I want to do it at a reasonable pace, so I can see the United States.”