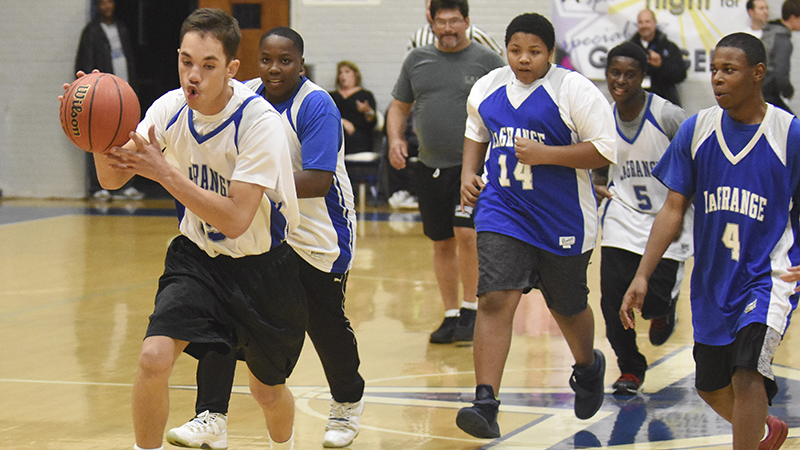 One by one, as they ran onto the floor, the players and cheerleaders in Thursday night’s basketball game at LaGrange High School raised their arms and jumped in excitement.

A few minutes later, when the game officially started, they showed off their talent in front of a nearly full gymnasium at LHS.

Thursday night was a first at LaGrange High as the first Special Night for Special Grangers was held at the school’s gymnasium. The game was meant to give special needs children at LHS a chance to be the stars, and the bleachers were filled with family, friends and students who came out to cheer them on.

“These kids are amazing, and they have talents and strengths like the rest of us, but a lot of times we don’t present those opportunities for them to share those talents,” said Mitzi Norton, who organized the event and serves as co-chair of the school’s exceptional education department. “A lot of times it’s not just sharing talents, it’s just that these kids bring so much joy. They are just sharing joy because of their enthusiasm, positive attitudes. They embrace everything in life, even coming to school every day.”

The joy showed throughout the night, especially when players made a shot.

Every time Devante Hightower scored he celebrated by running to the bleachers and putting both arms up in the air. After his third basket, he even received a high-five from one of the officials.

“Words cannot express the emotions I’m feeling. My heart is full right now,” Norton said. “It’s not just the smiles on their faces, but also I’ve seen the parents tonight jumping up and cheering on their child. Those are opportunities they don’t get very often.”

Noah Mazzolini, didn’t play in the game, but he participated in the drumline and had a blast.

“He was so excited. We got home and he couldn’t settle down and he’s still excited today,” said his mother, Jodi Mazzolini. “It was just an awesome night for the kids, for us parents and for the typical kids that go to school there that came out and showed their support. It was great.”

Tammy Marable’s son, Cameron, participated in the game Thursday night. She said it meant a lot to him.

“Sports is something Cameron loves. To actually be able to play at his school with his peers, both the special need students and the regular education students is something I can hardly put into words,” Tammy said. “The joy that it gave him and me as a parent watching that was priceless.”

“[Cameron] has been in classes with these students down through the years and he’s gone and watched and he’s cheered and he’s supported many of them. To turn that around, where they were there supporting him was just fantastic,” Tammy said. “You can tell we have a very good student body at LaGrange High and we have some children whose parents have done an excellent job with them.”

Norton said the idea came from another school, in another state that did something similar. She shared that idea on Facebook, and support started coming in from students, teachers and the rest of the LaGrange community.

“I shared that post and the feedback from the teachers, community and students was ‘we’ve got to do this. We’ve got to do this’ and everybody just jumped on board,” she said. “It’s been amazing, but it’s definitely been a schoolwide, community event, and these kids, I can’t tell you how excited they were.”

There was no cost of admission but donations were accepted for Circle of Friends, a club at LaGrange High where special needs children at the school are given real world opportunities.

Parents say they would love to see the special night turn into a regular event at LaGrange High.

“We were probably some of the last ones to leave because he was so pumped. It was all he would talk about the rest of the night and even when I woke him up this morning he was still talking about last night,” Tammy said of her son Cameron. “This is a memory that will last him a lifetime.”