LaGrange wakes up to snow Saturday 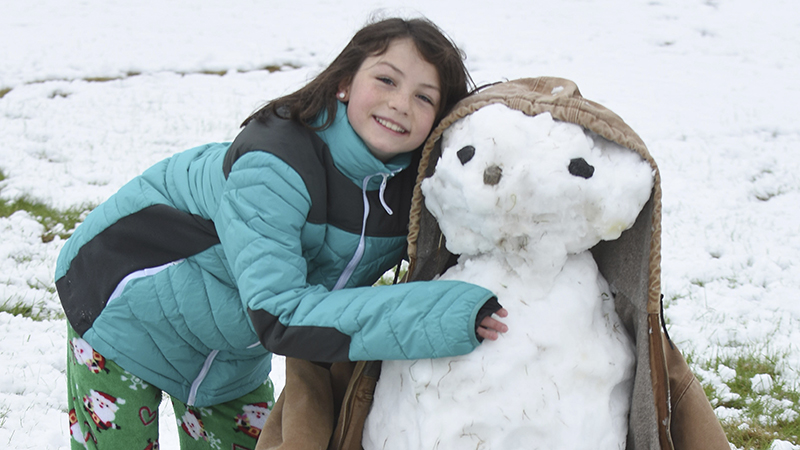 Raleigh Thompson poses with her snowman Saturday morning at The Thread. --Daniel Evans

By the time most residents in Troup County went to bed Friday night, the thought of snow was a forgotten pipedream. On Friday, parts of Alabama and Georgia were covered in snow, while Troup County as a whole had been surpassed, with most of the storm going north.

During the wee hours of Saturday morning that changed and by the time many woke up Saturday, LaGrange had snow on the ground.

For many, it was an early Christmas present, but the snow didn’t last long.

While parts of Georgia received more than a foot of snowfall, LaGrange appears to have received under an inch.

Despite the relatively low totals, it snowed for several hours  Saturday and temperatures stayed at or below freezing until about lunchtime, so there was plenty of time to see it before it melted. Automobiles were covered in snow flurries and the statue of Marquis de LaFayette was partly covered in snow.

The statue is always a popular spot for photographers, but on Saturday there was a steady flow of people who stopped to take advantage of seeing it topped with wintry precipitation by a rare Southern snowstorm.

By 11 a.m. Saturday, the sun was out and much of the snow began to melt, though low temperatures Saturday and Sunday allowed for a few shaded spots to make it through the weekend with snow on the ground.

The National Weather Service in Peachtree City estimated that LaGrange received “trace amounts” of snow, but there was enough for many to build snowmen. Yards were completely covered, as were rooftops.

The weather wreaked havoc on sporting event schedules in Georgia.

Six of the high school football championship games scheduled for Atlanta’s Mercedes-Benz Stadium were cancelled Saturday and were postponed to next weekend.

The Georgia High School Association posted that the unplayed games will be hosted by the higher seeded schools.

The LaGrange Police Department warned drivers to stay off the road during the storm, but all roads remained open and any ice on roadways was gone by the afternoon hours Saturday.