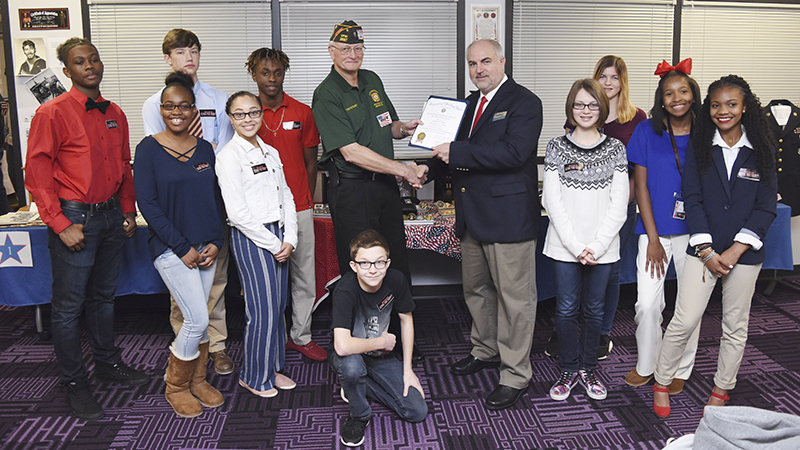 THINC College & Career Academy teacher Ken White poses for a picture with his class as he accepts the Veterans of Foreign Wars teacher of the year award for Coweta County.--Daniel Evans

White received the award Thursday while his students unveiled their Heroes Among Us project at the school.

Before taking the photo, he gathered the group leaders from the project and thanked them for all they’ve done.

“You all have been a blessing, your hard work,” White said to his students. Some of you have stayed after [school working on this]. This is because of you all. That’s why I wanted you in here. I’m just saying thank you for this.”

The award was given to White by Thomas Fetchet, junior vice commander of VFW post 2667 in Newnan.

He said that White’s overall accomplishments made him stand out well above the other finalists for the award.

“In his packet, he explained in detail about all this today, as well as he’s doing in the future,” Fetchet said.

White is also the VFW’s district teacher of the year, which covers several counties. He received a small monetary award and a plaque for each accomplishment.

He’ll now move on to the state level, where he will compete against district winners from all over the state.

“He won it for high school level and we’re proud of him,” Fetchet said.