Gift of the Magi play to open Thursday 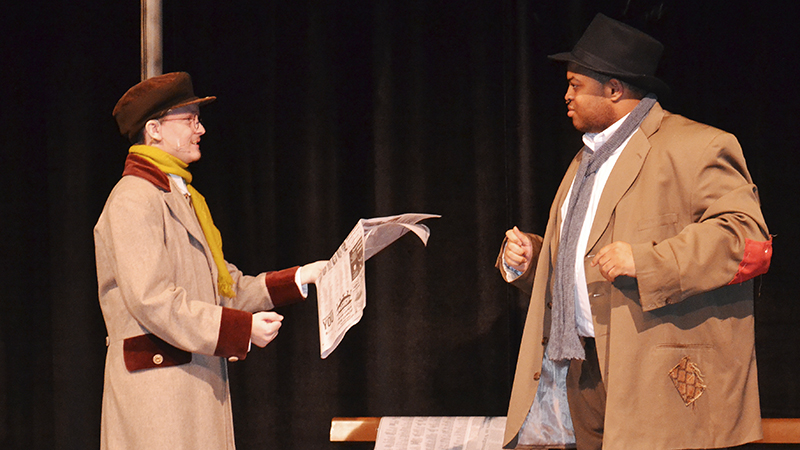 Monico Garcia, left, plays Jim Dillingham opposite Zeke Weldon as Soapy Smith during a rehearsal of “The Gifts of the Magi.” Opening night will be this Thursday, Dec. 14 at 8 p.m. at New Horizon Theatre. --Steven Thomas

WEST POINT — With one day until opening night, New Horizon Theatre is gearing up preparations for “The Gifts of the Magi,” based on the works of O. Henry.

Comprised of “The Gift of the Magi” and “The Cop and the Anthem,” the play features performances by Zeke Weldon as Soapy Smith, Monico Garcia as Jim Dillingham, Jayde Singer and Della Dillingham, Liberty Jewel as Willy Porter, Maleria Goodman as City Her and Tony Peregoy as City Him.

“Magi” is directed by Bill Nixon with music direction by Tonya Frank, technical directing by James Alsobrook and accompaniment by Gail Douglas. The idea to put on “Magi” came about three years ago, according to Nixon, who is also artistic director for the theatre, but casting was an issue.

“We had six people that could sing the parts, but we ended up with a 40-year-old Jim and an 18-year-old Dela. That didn’t work.”

But Nixon couldn’t be happier with the group set to star this week.

“This is a great group,” he said of the six people performing in the play. “Their all great singers and actors.”

Auditions for “Magi” consisted of 16 people, each one capable of performing the part. Nixon noted that each of the actors auditioned in person except for City Her actor Maleria Goodman, who sent in a video.

“She’s got a great mezzo-soprano voice,” he said. Once all the parts were cast and brought together, Nixon said they meshed well. “We ended up with pairs,” he said. “That’s key.”

Practices started six weeks ago and the group only does so for six hours each week. Weeks later, Nixon said he plans to throw in a few “monkey wrenches” on purpose.

“We don’t want them to peak too early,” he said with a laugh. Nixon recalled last week, which he labeled as “a total disaster,” which thrilled him.

“We got off book. They couldn’t remember their lines or the music,” he said. “It was just a disaster.”

Continuing on, he suggested that when actors have issues like last week it shines a light on what shortcomings they have and allows for corrections. Taking this into account, he said they would be more than ready for opening night. This week Nixon plans on nitpicking little points so the actors don’t get into a rhythm.

“That’s kind of a formula for me,” he said. “It seems to have worked.”

The one issue that would be a major disruption would be if someone were out sick. With no understudies in place, it would be the only thing that would cause him to worry. Nixon recalled a show a few years ago where one actor was out with a contagious illness.

“We grabbed another actor who had not seen the show and came to one rehearsal, put an earbud in his ear and I sat in the control room and threw him lines for two nights. No one in the audience ever knew.”

He noted, however, that this solution wouldn’t work for “Magi” because it is a musical. On the issue of audience numbers, Nixon said he expects around 150 attendees, about three-fourths of the theatre’s capacity. While opening night is expected to have the largest crowd, it is word-of-mouth from those in attendance that will bring in people later.

After the run of “Magi” is complete, New Horizon will present Julia Langley’s “Once Upon a December” on Thursday, Dec. 21 at 7 p.m. After that is “The Nerd” in February. Casting for it begins next week.

“The Gifts of the Magi” will be presented this Thursday and Friday nights at 8 p.m. EST and Saturday at 2 p.m. and 8 p.m.