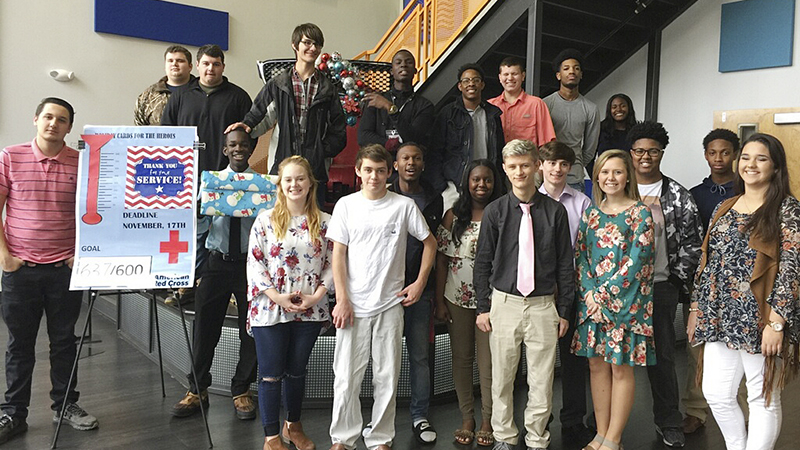 Thanks to students at THINC College and Career Academy, more than 600 veterans and current military members will receive a Christmas card this year.

The students in Jane Robinson’s English classes set a goal of writing 600 cards as they participated in the American Red Cross’ Holidays for Heroes program. They surpassed that goal and wrote 637 cards in all.

“My students got excited that this was something they could do for veterans and active service members,” Robinson said.

While Robinson’s tenth and twelfth grade students led the charge, other students got involved too in what turned into a schoolwide effort.

“They shared in each of the classes the guidelines and distributed and collected cards,” Robinson said.

“Every student at THINC participated.”

The American Red Cross lists specific stipulations the cards must follow in order to be mailed out. They can’t include contact information or a full name with an address, and students made sure those rules were followed.

Robinson’s classes have been doing this project for years. She’s been at THINC nearly three years and this is by far the largest number of letters they’ve had.

“I’ve never had the amount of cards that we collected this time. They bought into this and they went in and they talked peer to peer in the classrooms and shared the idea,” Robinson said.

Students put a personalized message inside the card, thanking each veteran for their service. By the time the cards were all in, students were already looking forward to doing the project next year.

“These cards are going to be distributed by the American Red Cross in care packages to many of the veterans that don’t necessarily have anybody that will remind them of the holiday or thank them for their service,” Robinson said.