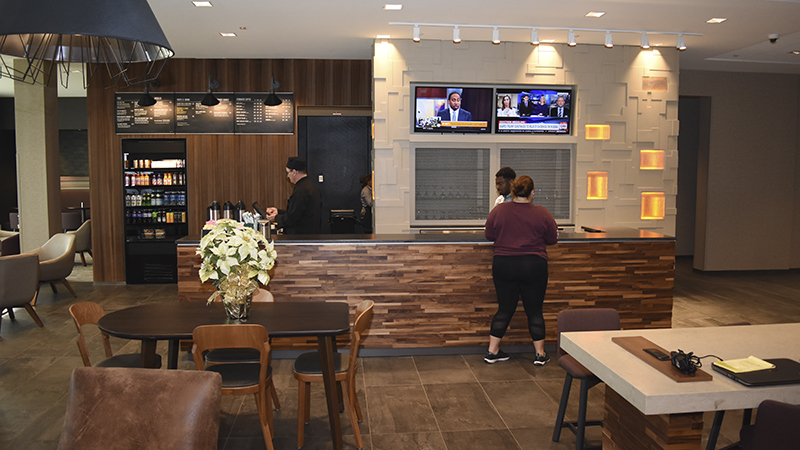 The wait for a downtown hotel in LaGrange is over.

The Courtyard by Marriott hotel officially opened its doors Wednesday afternoon, after getting the green light from Marriott officials. The hotel, which featured 90 rooms, is owned by Paramount LaGrange, LLC and managed by Paramount Hospitality Management, LLC out of Atlanta.

Several overnight guests saw the hotel was open and booked a room Wednesday night, and it’s likely to fill up as people realize it’s accepting guests.

“We [were officially open] at 3:15 p.m. and at 3:30, our first guest checked in,” said Kristy Malone, general manager of Courtyard LaGrange. “He made the reservation online and came right in, so that was awesome for it to be such a quick turnaround.”

Anyone wanting to book a room had been able to for the week of Dec. 20 and beyond, but those restrictions were lifted Wednesday afternoon when the hotel opened.

Beth Schiller, director of sales at Courtyard LaGrange, said she asked the guests who did stay Wednesday what their experience was like.

“A couple of them have stayed at Courtyards before. One was here for a funeral, one was here for business,” Schiller said. “Their stay overnight was pleasurable. I asked them how was the noise, how did you sleep, was your room comfortable, how was the temperature, and all of that was good.”

Although there weren’t a lot of overnight guests Wednesday, the bistro area saw a lot of foot traffic Thursday morning as LaGrange residents learned the hotel was open. The bistro features a 24/7 Starbucks and many were dropping in to get a coffee.

“Everybody has been waiting for about a year for this place to open up, so it’s fantastic,” said Ryan Deimel, who dropped by to get coffee. “Unfortunately, I hate to say it but going across town all the time, it doesn’t sound real far but when you do it every day it gets old after awhile. Since this is downtown and it’s new and it’s fresh, you kind of want to come in here. It’s very convenient.”

The bistro also has a special latte that is only available at Courtyard Marriott hotels. It is not served at regular Starbucks locations, Malone said.

The hotel doesn’t have a liquor license yet, so the bar cannot serve alcohol, but that is a work in progress.

More than 20 wedding parties have made plans to stay at the hotel next year, Malone said. Several class reunions have already been scheduled.

The hotel’s look and feel is only the second Courtyard by Marriott with that design. The lobby and rooms have a modern look, and electrical outlets are conveniently placed where guests can keep their electronics charged. There are three media pods in the lobby where meetings can be held, or where families can sit and have breakfast. Each pod includes a 32-inch television.

“From day one, Courtyard has prided itself as a brand that listens to business travelers,” said said Callette Nielsen, vice president and global brand manager of Courtyard, in a press release. “Today’s technology has changed how people travel. Our guests want a room that has purpose and flexibility that enables a seamless transition between relaxing and working. Courtyard is designed to offer them a relaxing and functional space to work the way they want to, when they want to.”

The hotel also features a splash pad and an elongated fire pit in an outdoor seating area. There is also an outdoor putting green for guests to use.

“It’s an incredible feeling because the community has been so involved. They have been patiently waiting and stopping by and kind of looking through the doors wanting to know what’s going on, what it’s going to look, when it’s going to happen,” Malone said.

The hotel features two large meeting spaces — the Mansours Room and the Callaway Room. The hotel is located where Mansours was for many years.

Interface flooring is also throughout the entire hotel, and products from local vendors are also used. There are 24 people are employed at the hotel and most of the them are from Troup County.

“We’ve brought an amazing team on board. We are like a family here at Paramount, and we are all excited about serving the community and bringing a new feel to the hospitality world here,” Schiller said.