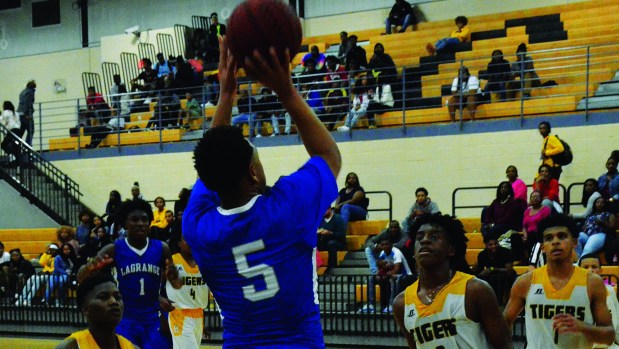 Once the first shot fell, LaGrange’s Covan Huzzie felt it was going to be a good night.

Huzzie, a senior guard for the LaGrange Grangers, was perfect on each of his five 3-point attempts on Tuesday to help his team beat Callaway 68-47.

“I always feel confident after I make the first one,” Huzzie said.

Huzzie and Bo Russell both finished with a team-best 23 points as LaGrange won for the fourth consecutive game after opening the season with two losses.

Huzzie has been a big key to the Grangers’ success.

A role player previously during his high-school career, Huzzie has moved into the starting lineup this season and he has excelled.

Huzzie has been in double digits in points in three of the Grangers’ past four games, and the 23 points he scored against Callaway was easily a career high.

Huzzie started out hot against Callaway, making three 3-pointers in the first quarter, and he continued to knock down shots throughout the game.

“He realized he had a hot hand, and good for him for not forcing threes,” LaGrange head coach Mark Veal said. “He played within what we’re doing.”

With his shots falling, Huzzie drew the attention of Callaway’s defense, and that benefited LaGrange’s other players.

“If I’m (making shots), they’ll play on me, and I’ll be able to get my teammates involved,” Huzzie said.

One of those teammates is fellow senior Daz Williams, who made three 3-pointers and scored nine points.

While Huzzie and Williams were draining shots from long distance, Russell was getting to the basket en route to a 23-point night.

Russell went to the free-throw line eight times and made five of those attempts.

While putting together big scoring nights is nothing new for Russell, it’s not something Huzzie is accustomed to.

Huzzie is getting the most significant playing time of his high-school career, though, and he is showing what he’s capable of doing, much to the delight of his head coach.

“That kid’s been in our program for four years,” Veal said. “He’s always got a smile on his face. He’s been a lot of fun to coach.”

The Grangers began the season with close losses to Newnan and Northside, but they’re rolling now.

The Grangers were hit hard by graduation following the 2016-2017 season, but they’ve shown in the early going they’re going to be a tough opponent once again.

LaGrange has won three consecutive region championships, and it has reached the state quarterfinals twice in the past three years.

“We’re going to surprise some folks this year,” Huzzie said.

While it is a new team this season, the players know each other well.

During the summer, LaGrange played more than 20 games, and many of the players also participated in a fall league.

“It helps a lot,” Huzzie said of the time the players have spent together on the court. “The more you play together, the more you hang out, the better you’ll be.”

LaGrange also has a handful of seniors, including Huzzie, who have been in the program for years.

The seniors are Huzzie, Russell, Jay Benton and Jalen Watson.